Ok, so what does this mean? Should I run out and buy a card at Hallmark? Who do I send it to? Orville isn't receiving mail anymore....


So, 1 has already been done. Check. 2, if you don't have a government building, is kind of hard. But 3. you could do things to celebrate National Aviation Day. For example, you could go build your own Wright Flyer. 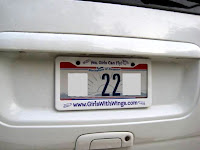 Before breakfast. Blindfolded. No?

How about:
Sporting your own Girls With Wings License Plate Frame? This picture is courtesy of Dan Kiser, Founder of Youth Aviation Adventure and an all around great supporter of Girls With Wings.


Don't have a car? That's ok, here's some alternate instructions from ehow.com.

Visit The Wright Brothers National Memorial in Kill Devil Hills, North Carolina, to see where the brothers got the first plane to work in 1903. The park has exhibits and reproductions of the 1902 glider and 1903 plane. Call (252) 441-7430 for more information on hours and events.

Go to Dayton Aviation Heritage National Historical Park in Dayton, Ohio, which hosts the Wright brothers' third airplane, as well as a restored print shop of the brothers. It holds free outdoor events for the whole family.

Read to a child. Teach your child the history of flight and the importance of the Wright brothers. Try Jane Yolen's "My Brothers' Flying Machine," or "First Flight" by George Shea.

Make crafts with family or at school. Draw images you might see out of the window of an airplane, make paper airplanes, or create collages of aviation images from magazines.

Celebrate National Aviation Day at the National Museum of the U.S. Air Force--the biggest and oldest military aviation museum. It is located in Springhill Pike, Ohio, and carries a large collection of aircraft exhibits.

From HolidaySpotPlus.com
WEBSITES AND ARTICLES ABOUT NATIONAL AVIATION DAY

National Aviation Hall of Fame (official): Information, history and facts about aviation.
National Aviation Day (Rumela's Web): History and Information on the holiday.
Wright Brothers National Memorial (Nat'l Park Service): Information and schedule events on the birthplace of aviation.
Aviation History Online Museum (official): Information, pictures and history of Aviation.
The History of Aviation and Modern Rocketry (TheSpacePlace): History of aviation through modern space flight.
History of Flight (AIAA): Information and history of flight from throughout the world.
This is not a traditional gift giving holiday. However, this day could be remembered though giving gifts with an aviation theme - airplanes, helicopters, balloons, gliders, spaceships or birds in flight.