Well, I am recovered. Between my last two 8 day tours for work where I worked in their office filing flight plans from 6am til 3pm, I did my six day hike in the Utah canyons. On my first day "off" I went to the Lost Nation Airport in Willoughby, Ohio, to participate in A Gathering of Eagles XII Airshow put on by the United States Aviation Museum, featuring aircraft of WWII, Korea, and the Cold War. Airshow proceeds benefitted the restoration of "Doc," a Korean-war era B-29.

What I didn't realize was that my "booth" was a marked off piece of grass on the airport (explains why it was only $100 - many shows are more than $1000). Talene, the newest member of the Girls With Wings Role Model Crew, had volunteered to help out so she went by to pick us up a canopy from the local mega store. Well, it lasted about four and half minutes before the strong gusty wind picked it up and tossed it like a leaf into the surrounding vendor tents and trailers. Luckily, no one was very upset and everyone jumped up to catch the tent, dismantle it, and throw the pieces in a pile near our site. The canopy was ripped, so there was no reason to put it back up.

So, for hours, Talene and I sat out in the blazing sun jumping up everytime a gust of wind knocked over our racks or blew t-shirts or jewelry items to the ground. I only brought stools, so every once in a while we would take cover under the nearest tent, run by the USO, to cool down and sit in their comfy chairs. I was really feeling the low sales weren't making up for the time, effort and energy to be out there! I was so exhausted I felt like lying down and napping in the middle of it all (except it was too dern hot!).

The sky also grew increasingly darker, and despite assurances that rain wasn't in the forecast, made us a little nervous. Remember, I have my life savings in these t-shirts sitting unprotected in the grass. About the time that Talene and I decided to pack up those items that were not selling so I could take them home and reduce the number of things out on Sunday, it started to rain. Then pour.

Amazingly, all these kind people from the surrounding tents jumped up to help throw merchandise into plastic bags, and get my fragile mannequins out of the wet! Even a guy's two little kids humped items into the fifth wheel trailer of a guy across the way who had extra room. I went to get my little trailer to get more bags and boxes to pack stuff up and we had everything put away in no time. What a great reflection on human kind!

Meanwhile, two of the men noticed my rather rickety trailer, held together by bungees. Hey, you need two people to get these bolts tightened and it's just me at home. So, they both grabbed their socket sets and tightened the trailer walls up right. Awesome! So I went home and slept for 10 hours. I could have slept longer, but I still had to get up to be back at the show by 9. Thanks also to Talene, who I know wasn't planning on being there all 10 hours.

The coordinator for the airshow felt sorry for us, so sunday he let me use a tent that had been abandoned by the vendor. Early the next morning my friend Carol and her husband Wally helped me to set up under this 10x20 tent - I felt like a queen! It was almost cold under the shade (it was still windy). Sales were still slow, so it was the perfect opportunity to discount merchandise, located the damaged items, get it all refolded, etc. I still went home sunday night and slept 12 hours.

All in all, it was a good time. And a good lesson, which I am constantly learning getting this business up and running. A woman harrumped when she had learned that my new tee, "It's not how tall you are, it's how high you fly!" was $22. Unfortunately, half of that price is my cost to have the tee made, and after I pay for the booth (like I said, only $100+10% of sales to go to the aircraft restoration), one quarter of that is for such logistics, and the remaining quarter goes to my accountant, my lawyer, the retail supplies (and display racks), my website, etc., etc., leaving little or none to reduce the money I've put into Girls With Wings. When I go to Oshkosh, my costs are so high that I make nothing. I even lose money.

Am I complaining? Heck no! I love getting out and talking to the people. Everyone loves the idea of GWW. I knew when I started this venture I was taking a risk, but I wanted to make a difference in girls' lives, which I have over and over. What greater reward is there?

So I am well rested now and packing up for the trip to Oshkosh. Before I can go, I am on my way to Dayton, to the National Aviation Hall of Fame for the inaugural Wings of Women Conference (WOW) to be held on Friday, July 20.

"Outstanding women who have achieved success and recognition in their respective field will share their passion, commitment and time with high school girls who are looking toward their future career. Some of the dynamic women of aviation invited to participate as WOW speakers and mentors include Connie Tobias, US Airbus Captain to Europe and first woman to fly a Wright 1903 replica, USAF Col. Colleen Ryan, Commander, 88th Air Base Wing, Wright -Patterson Air Force Base, Dr. Peggy Baty Chabrian, President and Founder of Women in Aviation, International, and others to be confirmed in the coming weeks."

Then I pick up the RV and head off to Oshkosh. I can't wait!

Back from my Trip to Utah! 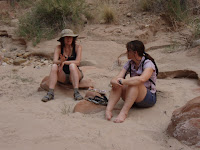 I am back from my travels to Utah - and although glad to be back, I really enjoyed my time communing with nature. Not only were temperatures in the 100s, but also breezes kicked around the hot sand. Whew. 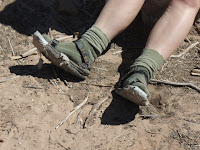 My dad, a co worker of his, and I spent a couple of days near Paria River, in a slot canyon, which was formed by a river cutting through the sandstone. It was amazingly beautiful being surrounded by canyon walls hundreds of feet high, seperated by only 10-20 feet of sandy floor. The river was barely visible this time of year, mostly a bunch of interconnected puddles. We were expecting a bit more water, so instead of wearing my hiking boots I wore my Teva sandals. After three days of hiking, I had to duct tape them together to make the hike out of the canyon! 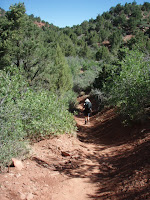 Then my dad and I went on to Kolob canyon, which was completely different. There was at least some vegetation, and a lot of hills to go up and down. Still hot and dry - in fact - it was so dry it was like a tinder box. Wildfires are a constant fear. Both places we carried everything in our packs; tents, sleeping bags, food, water, etc. The only wildlife we saw were a couple of skunks!

We did a day hike here to Bear trap, a canyon with a waterfall. It was very cold water, maybe 50 degrees. It took our breath away - but having been days without bathing, it was impossible to resist. 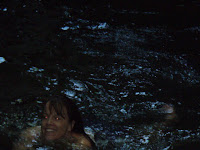 It was a great time. Even though I am stressed about our upcoming appearance at EAA AirVenture in Oshkosh WI with all that I have to do to prepare for that, it was so refreshing to get away for a week to commune with nature. I know this entry doesn't have much to do with aviation, but it does have to do with travel, getting out to see more of the world, testing your physical abilities and making the most out of life! 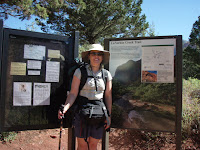 Have a great day,
Lynda