I haven't posted a long while just about flying stuff. So I've got some things I'd like to tell you about that happened yesterday. Last night we landed the Citation X in South Dakota after taking off from Sun Valley, Idaho, which is a trip of nearly 500 miles straight east. We were doing a "repo" or a reposition leg (this is opposed to a "repossession" - economy isn't that bad yet!) for today's trips with passengers. We flew directly over the Black Hills National Forest. The scenery I enjoy outside of my "office" windows is some of the most amazing ever and it's one of the biggest reasons I enjoy my job as a pilot. The name "Black Hills" comes from the Lakota words Paha Sapa, which mean "hills that are black." Seen from a distance, these pine-covered hills, rising several thousand feet above the surrounding prairie, appear black. Unfortunately, one of the realities of flying at altitude over famous landmarks is that they just don't quite have the same impact as from the ground. The air traffic controller that was vectoring us around to the airport (I think) was kind enough to bring us close to a very famous location. Unfortunately, he brought us right over the top of this site, Mt Rushmore, so we were unable to see any of it. The picture on the left is obviously not what I fly, and it appears to have been photoshopped. The perspective just doesn't make sense! Check out the official website at http://www.nps.gov/moru/index.htm

What does that really mean? Well, according to the Beaufort Scale:

So the captain and I discussed the weather before we left Idaho. Although I've been flying the X for a year and a half, the CPT has been flying it for seven. He gave me the option of flying the leg, but we figured that the gusty winds could cause some difficulties as far as the landing would go. It's not that we didn't think I could handle it, but IF something were to happen, it'd be pretty awkward trying to explain why we didn't have the more experienced crewmember on the controls. Especially with all of the bad press the aviation industry is getting lately.

Luckily the winds were right down the runway and turned out to not be an issue. It was kind of funny seeing less than 100kts of groundspeed in a X, and seeing traffic on the highway below almost matching our speed! Once we landed, we had more of a battle packing up the airplane and getting into the van without being blown over! In the van a fellow passenger (not a pilot) asked us if we had to learn to land faster in such high winds. Actually, we explained, that airplanes land INTO the wind, so actually we were landing more slowly. Our low ground speed was our airspeed (about 130kts) - the wind speed (30kts) = 100kts. The airplane doesn't fly in relation to the speed over the ground, however, but the relative speed with which is moving through the air. 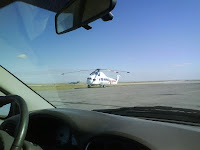 From the van I took this picture of a helicopter whose blades were just going crazy with the wind blowing. This is a Sikorsky 58T, a military helicopter originally designed for service in the anti-submarine warfare (ASW) role. It is now often used in construction, like Desiree does and blogs about in The Adventures of Chopper Chick! Not also does Desiree support Girls With Wings but she has also received great publicity for all of the amazing things she's done flying helicopters in many different capacities. p.s. I also love that "Chopper" also refers to her having a motorcycle, which I do as well!
2 comments: Links to this post