Another Girl With Wings 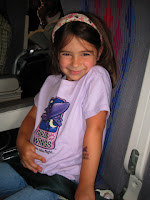 Thanks to Monika for sending on this picture of her daughter wearing her Girls With Wings tee (and tattoo) from Oshkosh this year. Monika debuted her documentary, Flyabout, with great success at Oshkosh. I have written previously how much I enjoyed her film (as did my 6 year old niece). Now I get to talk about it again!

Monika Petrillo has never been a person to postpone her dreams. So at 24 she decided to get a pilot's license. A year later, her father surprised her by learning to fly as well. As the movie begins, they take off together to circumnavigate the continent of Australia.

The only woman pilot in a group of eleven people, Monika experiences the true freedom of flight above one of the most untouched places on earth. As she becomes exposed to Australian culture, she learns about the Walkabout, a spiritual journey the Aborigines have valued for tens of thousands of years. That inspires her to use this trip to take stock of her own spiritual household. The first step toward that end is to relax. But that proves much more difficult than she thought: a tight schedule, careful and constant maintenance of the aircraft, pot-holed dirt runways, mechanical failures, sudden loss of visibility and unpredictable crosswinds keep her both too busy and too uptight. But what impacts her most is the conflict that arises between her father and herself.

They had both underestimated the consequences of her father‘s limited experience as a pilot, and that quickly takes its toll—not only on the collaboration in the cockpit, but also on their relationship. Monika struggles with feelings of responsibility on the one hand versus doubts about contradicting her father, who has always been her role model, on the other.

As their plane continues its path across the outback, the young woman slowly comes to realize that personal and spiritual growth can‘t be forced. Instead of searching so hard, she starts to look out the window. And that simple action is the first step towards learning the real lesson.

Flyabout is an intimate, personal story about a pilot‘s journey around Australia. It is the story of a young woman growing into an adult and coming to grips with how generational roles change over time.