The Girls With Wings Pilot Shop is CLOSING! 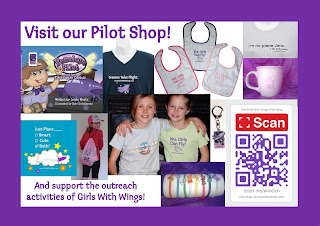 It was with great sadness that I recently had to announce the closing of the Girls With Wings Pilot Shop, the place to get licensed GWW merchandise and all the aviation themed accessories I could find that would appeal to girls and ladies. My reason for starting the line was simple: I wanted to offer the kind of merchandise I could buy for my nieces that I could get for my nephews. When I became a pilot in 1993, there was virtually nothing available. I had to buy the girls (first one born in 2001), things that were maybe a periwinkle blue - as close as I could get to purple.

I started out by buying a $2500 embroidery machine, with which I stitched out my self styled airplane logo onto tees and onesies for friends and co-workers. So many people responded with enthusiasm to my offerings that I soon realized that a bigger issue was at stake - why weren't these products already available? Why was half of our population excluded from all this cool aviation swag? And did this perhaps have something to do why the pilot population remained 94% male?

So with my small success thus far, and to reduce my losses with screwing up the embroidery so much, I had some tees screen printed (said niece born in 2001 modeling first one to the left). And I started attending shows and conferences to sell my wares. The enthusiasm with which my things were received encouraged me to continue booking these booths, but there are major costs involved. Some of these booths cost several thousand dollars, and once you add in my travel, lodging and shipping, I was never breaking even, much less making a profit to return to Girls With Wings, Inc, the nonprofit organization. Online sales were not setting any world records either, no matter how much I tweeted and facebooked about it. If you've ever owned a business, not even necessarily a store, you know the overhead of which I speak and have to cover.

And so, I regret to say that I just have to close the shop. So many people have responded with an aghast "But you can't! There's no other place for us buy these things!!" I know, I know. But I've been personally subsidizing the endeavor and I just can't do so anymore in its present form. So for the time being I am offering clearance prices (mostly 50% off) on all remaining merchandise. When things settle down and I can look at how to reformat the structure, I hope to reopen the Girls With Wings line. Sales have gone through the roof since I marked the prices down to what I paid for the items (or even less than) and its a basic business practice that you can't continue running a business at so great a loss.

But I do want to reiterate: Girls With Wings, Inc., the nonprofit organization, is NOT GOING ANYWHERE. We will continue our outreach activities because the need to do so  is still there. In fact, I want to share with you this amazing email I just received (via the store website, BTW).

I just wanted to write to you about a recent event that happened on our flight this month.

My daughter Anna and I discovered this program along with the Penelope Pilot book when we met Linda at Air and Space in Washington, D.C. in 2011.  Linda spent the time to talk to Anna and autograph her copy.  The book has become one our favorites.

At the age of 6, my daughter has become quite the frequent flier.  She carries the book with her on many flights.  Several pilots have invited her to come take a look in the cockpit as we board the plane.  Unfortunately, we have lost our paper doll Penelope, but we still take the picture.

This leads me to our most recent flight back from Europe.  Late in the flight, I  thought I heard the female voice on the intercom say she was the pilot.  I stopped one of the flight attendants to ask if indeed we had a female pilot.  You should have seen this male flight attendants face.  His face lit up and puffed his chest a little as he proudly told us that his crew was led by the first long-haul female pilot for SAS (my emphasis). In fact, the whole crew seemed quite proud of this fact.  He even told us that he would get the pilot to sign Anna's book and that we might be able to meet Charlotte, our pilot.  Since it was late in the flight we would have to wait for the book to be signed until after we landed.

As we exited the plane, we saw the book waiting for us by the door.  When we asked if we could meet Charlotte, the flight attendant happily went to get her.  Charlotte had never heard of your program, but was glad to hear it existed.  She also took some time to talk to Anna and take a picture. Hopefully, we'll see Charlotte on another one of our overseas flights.