Breaking Through the Clouds

At the terminus of the 2010 AirRace Classic, in Frederick, MD, I attended the premier of a documentary about the first women's national air derby, which took place back in 1929. I remember being blown away by it then and I was so happy to be asked to review "Breaking Through the Clouds" for the producer Heather Taylor (and stock it in the Girls With Wings online pilot shop, too).

I was no less impressed with it the second time around and didn't need a theater-full of Air Racers to influence me. With still only 6% of licensed pilots of the female persuasion, aviation is still a male dominated profession in the 21st century - so you can imagine what it was like over 80 years in the past. Woman pilots are often amazed they are still considered pioneers nowadays, so imagine just a generation or two ago. I believe we women pilots have an obligation to study and be inspired by those who came before us paving the way. These are the groundbreakers, the "firsts" like these women racers, the WASP (Women Air Force Service Pilots), the Mercury 13, and more.

[...It's similar to being an United States citizen. They didn't let you graduate school (or pass your citizenship test) without knowing all about the founding fathers, right? We can show respect to these women's accomplishments by keeping them fresh in our collective mind. We cannot let them be forgotten!]

A little history. The Cloverfield, CA, to Cleveland, OH, event was promoted by Elizabeth McQueen, the founder of the Women's International Association of Aeronautics. Back then, there were only 75 women pilots and women had only had the right to vote for a few years. The women-only race was sponsored by the National Exchange Club, an organization still in existence today, but whose first half of history concentrated on promoting the new technology of aviation.

What's so funny is many aviation companies who came around to support the race did so because they wanted to prove that even a *gasp* woman could fly an airplane (so, heck, guys, no reason for you not to buy one!). Originally, though, the women had to band together to oppose a rule that male mechanics had to ride along. They were afraid that the perception would be, obviously, that a woman couldn't do it alone.

These ladies were so awe-inspiring. Louise Thaden had Travel Air build an airplane just for her. She observed it at the factory being manufactured, took a turn in the pattern once it was put together, and then just flew away in it! Can you imagine? Of course, she did get a small case of carbon monoxide poisoning, but I digress....

You can read about the race online, and in books, but the great thing about this documentary is the way it all comes together. There are interviews by some aviation rockstars, Patty Wagstaff and Julie Clark, as well as amazing footage of beautiful vintage airplanes to give you goosebumps. The cinematography, paired with the historic footage, put to a beautiful soundtrack, brings forth feelings you can't get from paper and ink. To understand and relate to the history of women in aviation, you MUST watch this. If you are a pilot, your chest will most likely swell with pride.

Many of the diverse women who participated in the race are covered in detail because of appearances by Louise Thaden's daughter, Pat, and Barbara Schultz, the author of a biography of Pancho Barnes. The years of research were obvious in the details. Actual historical documents were used when available. By the end of the documentary, I was quizzing myself on who appeared in each photo and trying to commit facts to memory. I felt like I owed them that.

I won't go into all of the details of the race. For that, you can watch the DVD yourself! But I was struck again and again about how these women bonded with each other. Despite the Derby being a competition, the women showed a spirit of camaraderie that was wonderful to witness. I could not watch the TV without cheering inwardly for each aircraft as the participants began their takeoff roll. And, of course, I longed to have been with them.

Ok, yes, I did race in 2009 (my series of blog posts about it start with this one), but we had advantages these women did not. For example, these women many times fixed their own airplanes. While we flew in comfort, they flew in oftentimes open cockpit airplanes (imagine riding a motorcycle cross country) with only a map (no GPS) to guide them. We didn't have the controversy and the sabotage either. Nor the damage to our airplanes from onrushing crowds. Nor, for that matter, the exhausting banquets and social events. One racer perished in the race, which threatened to prove "conclusively that they cannot fly," from one headline, but many crossed the finish line with much more than a score card. They had made history.

The 9 day race proved conclusively that women could fly and do so with courage, honor and poise. These women and others eventually went on to form the Ninety-Nines, an organization intended to have all women pilots support each others struggles and victories. An invaluable mission, unfortunately, still called into service today.

A recently added trailer of the film:

A new reason to love coffee

This morning, as usual, I sprung out of bed in anticipation of enjoying that first cup of coffee. Ok, so "sprung" may be an overstatement. But still, I was pretty psyched. If you're anything like me, your coffee gets you going in the morning. You're more productive with a cup of fresh brew in your hand first thing in the am. If you can't have that java fix in the morning you may suffer from headaches, or worse - your whole day may be shot. I'm right there with you. I think I'm addicted. And you may be too.

But never fear. I bring you the best reason ever to be a slave to a mood altering substance...

...It's the relationship Girls With Wings, Inc., just formed with a company called Flying High Coffee, LLC. I shouldn't probably use the words "addiction" and "high" in the same blog post, but there it is.

Rob Riggen, the Owner of Flying High Coffee, is offering to be the one "providing your daily lift." Provide it he did by providing me with a sample of Sumatra coffee. Oh, yum. As described on the website, "Our organic Sumatra coffee is earthy and full-bodied with very low acidity. It has a wonderfully heady aroma that hints at its boldness and complexity. The low acidity leaves no bite and allows for a lingering finish of intense flavors. This is a popular coffee and for very good reason." I completely agree.

And here's the best part. That relationship that I was talking about? If you buy some of Rob's yummy coffee, he will provide 15% of his profits to benefit Youth in Aviation. Specifically, the Girls With Wings scholarship. Now THAT, folks, is the kind of lift I can get behind. Er, uh, under. Well, you know what I mean. 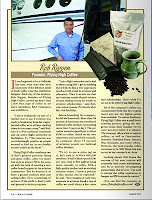 Rob's innovative method of paying it forward in aviation is getting big press lately, including the Twin & Turbine March 2011 issue.  According to his research, 75% of aviation people are habitual coffee drinkers. If half of just the 400,000 AOPA members alone spend $200/yr on coffee, that's $40 mil spent on roasted beans. "Now imagine if each time someone in aviation drank a cup of coffee we could direct a few cents into scholarships." Even if you don't need an excuse for downing your steamy mug of brew, it's still nice to have an incentive.

And while you're there, buy some coffee to help Girls With Wings make dreams take flight!
No comments: Links to this post