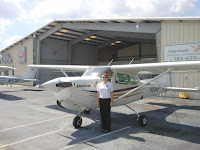 Wow. Is Oshkosh really over? It seems like years ago that I went up to American Flyers in Houston, TX, to finish up my CFI training (which will be the subject of a future blog entry). For two weeks I did nothing but do one on one classroom prep, fly, and study. Ok, I might have let some Girls With Wings stuff slide in there, but mostly I had a goal: finishing my CFI rating before I had to leave for Oshkosh. And that meant leaving OHIO for Oshkosh, which was 1500 miles from Texas....

So on July 11th I passed my CFI Checkride. It was, by most standards (also known as other people's horror stories), "easy." But it was no walk in the park. When it was over, I went back to my hotel room and packed up everything I'd been carting around for the last few months. I was basically useless (IOW brain dead) for anything more. People have asked me if the CFI rating was harder than a jet type and I reply enthusiastically, "yes." There was so much to know as a CFI, mostly getting back to the basics, whereas my successive type rides mostly just built on each other. There are small differences in different airplanes, but to know the steps of the landing phases (and how to teach it!) was a lot more difficult.

Anyway, I said that was for a future entry... I drove the two day trip back to Ohio and immediately began the recovery process. First I cleaned up six months of spider webs, cat hair and dust that tend to accumulate in a century old house. Then I unloaded my car, mentioned in many blog entries and Facebook posts (I wonder if it should have its own FB page?) - with all of this driving, I have recently turned over 162,000 miles on it. Better not jinx it; it could require another sacrificial offering to the Honda God. Then I went to Daffy Dan's to pick up all of the t-shirts for my Oshkosh (otherwise known as EAA Airventure) booth. ALL of which needed to be received, priced, folded, packaged and packed into boxes. One of the many time-consuming behind the scenes tasks of a small business owner.

I left for Oshkosh at 3am on Saturday morning, hoping to get there at a reasonable time (daylight). I hadn't planned on leaving that early, but with all of the anticipation I couldn't sleep. I was awake at 12:30am and after an hour of tossing and turning, just got up and finished loading the trailer in the dark. In the rain. Not long after I left home I had to spend an hour under a freeway underpass because the rain was coming down so hard not only could I not see two feet in front of me, I also was hydroplaning all over the place. 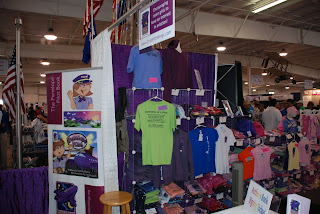 The rest of the drive was relatively uneventful and my dad and I arrived Camp Scholler mid day on Saturday, which would become Home Sweet Home for the next week. We threw together our pop-up camper and then went over to Hangar A to unload all of the stuff. On Sunday evening, Dad, my sister, two nephews and I had just finished putting the booth together when someone from the logistics company came by to say that he'd forgotten to run electricity to the rest of our aisle and would need to access the floor panels running under our booth. Under our carpet. Under the mats. Under the grid system we used to stack all of the t-shirts. The grid system that took me hours to build (my dad refuses, too frustrating). And all of the t-shirts in the cubes that were sorted and stacked neatly in their slippery plastic sleeves.

So I ask, "can you not just run the electricity along the ceiling (since, clearly, everyone else in the aisle was set up too, and, in fact, gone for the evening)?"  He seems to think that's a pretty good idea but leaves. We wait around for a while, but he doesn't return. So I post a note that asks them to call me before dismantling. No call, so imagine our surprise when we come in an hour before the show starts monday morning and CLEARLY they had come in that night and disturbed the booth anyway. How did we know? Well, for starters there was a small mountain range of electrical cords snaking under the carpet, which was no longer flat and even. Especially were there was a foot size hole between the plates. And they had tried to move the grids, which if you have any experience whatsoever with them, you know that this is not possible, so many of them were now disconnected. And lastly, the t-shirts that had slid out of the cubes had been just randomly shoved back in. Wonderful.

Worse was the reaction from the logistic people at the show, which I will now gloss over. [Gloss.] Beautifully though, some angels from EAA stepped in to help clean up the mess, minimize the damage and try to make a mismatched carpet runner (we had to cut our carpet to shove the cords under the plates again) as pretty as possible. Sigh.

But we conquered this wrinkle and began what is truly the best part of Oshkosh, seeing all of the folks and telling them about Girls With Wings. And receiving their sincere compliments about our outreach efforts. And having them tell me how much the recipient of their Penelope Pilot book from last year LOVED it. Like this young lady, who came by repeatedly to talk to "LYNDA MEEKS!" (that's how she said my name, every time) as she visited to show me her airplane colored in Penelope's colors, update me on her activities at the show, and so on. She was completely adorable. HER dad said she's not going to make it again til 2013. Just won't be the same without her.

The week was really a blur, since I had very little opportunity to prepare for it because of the CFI training. Last year I had a color coded staffing chart. Not this year. I also was missing some of my key helpers, Erica and Jacqui, who were so tremendous last time. My dad, of course, was there all day every day. My nephews, ages 10 and 14, helped for the first couple of the days. I also had at least one person helping during the busy times and when I had to go to do a seminar with Youth Aviation Adventure, interviews or author's signings at the EAA Wearhouse. There are no words to express how much I would like to thank all that volunteered: Carole, Lisa, Lin and her mother, Keith and his son Aiden, Camila, Amy and Jim, Sarah and Barbara. My sister came back in at the end to help with the 2nd worst time helping at a booth - the cleanup.

There are a couple of times that deserve special notice, thanks to Rob Riggen of Flying High Coffee. He presented both Girls With Wings and Able Flight checks for $500 for our programs. As if his coffee wasn't insanely delicious on its own, he has decided to funnel his profits back into aviation programs.  I am very honored GWW has been chosen as a recipient of his generosity. He was also the inspiration for us to keep our spirits up the whole week. If you were there, you know that it was either a. hot, b. rainy, or c. hot and rainy. Rob had a smile on his exhausted face the entire time. After all, he was up before everyone else brewing his coffee, which he gave out for FREE to raise awareness of his brand. Please support his company - especially designed to cater to the aviation community.

Another special time was seeing the trailer for AcroCamp on a big screen. I don't know about you, but when I see people on a reality show I wonder how they can act so naturally. They, like I did, probably started forgetting they were constantly being recorded. It takes seeing yourself on-screen to realize that you may be setting yourself up for a bucket full of embarrassment. Stay tuned to the release of the documentary this fall and share this embarrassment with me!

Unfortunately, there were so many events I didn't make. I didn't make Arty's presentation about her ultra-light flight from Oregon to Oshkosh (she also flew from Oregon to Florida for Sun and Fun last year). She blogged about both trips. And so many more events, tweetups, etc. I'm so sorry.

For example, I was invited again to participate in Women Soar, but didn't receive notification until just before Oshkosh and sadly didn't have help that weekend to cover the booth in order to attend most of the activities. I did get to go to the icebreaker session - which was really fun. I hope to be able to participate next year, if they forgive me for standing them up. It is really a wonderful program. Some of the things these high schoolers have already accomplished make me feel like a slacker!

I am not going to even attempt to mention all of my wonderful social network or otherwise known aviation enthusiast friends that were there. I am embarrassed to say they had to all come by my booth to visit me since I was scarcely able to leave it. Next year my goal is to do something, anything, to free myself up a bit more to get out there to network, and maybe, even, GASP, enjoy the show!?!

If I sound too much like I'm complaining, I have to admit that at the beginning of the show my dad (who is my right hand man for most of what GWW does) and I were questioning our attendance. It's quite an expensive, labor intensive and time consuming endeavor. No matter how many t-shirts we sell, we never quite break even. But by the end of the week, though we were exhausted we both decided we'd go another round next year. If you need to know how supportive the aviation community is of your organization, you have to meet with them face to face. One certainly has a wide audience at Oshkosh. And if you want to know your impact, you have to see their reactions, like these girls, some of the many that sat down in the middle of the booth to read the Penelope book right away.

And so, Monday morning, as dad was fixing to drive away in his truck and camper, and I was driving home with my trailer, we both decided to have a go again next year.  It's just too rewarding.

And as far as my post-Oshkosh activities, though the trailer has been unloaded onto my back porch, the unsold merchandise still has to be inventoried and put away so it is available at the online Girls With Wings Pilot Shop. I have tons of emails and other correspondence to answer. Grants to apply for. Aviation Inspiration Days to arrange. GWW Chapters to train. And the Scholarship application window has closed, so those apps need to be evaluated and awarded. Gosh, what else? Oh, yeah, I need to actually get a job as a CFI before I forget all that I learned. Trust me, I do NOT want to go through that again.