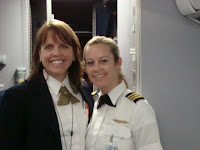 I flew home yesterday from Newark, NJ, on Continental Airlines. And as I'm standing against the wall, trying so hard not to doze off before my flight home (didn't get much sleep that night in Aspen apparently), who should I see walking down the concourse but GWW Adrienne! Not only was I so happy to see her (what are the odds?), but she was also the First Officer on my flight home to Cleveland. How exciting was that? Again, there is so rarely a female pilot on these major airline flights, but to actually be friends with one of the pilots on my travels to and from work? 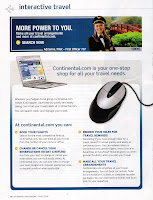 So cool. After the flight I stopped at the front of the airplane to snap a picture with her. I think the other passengers thought we might have been a little goofy, but this kinda thing doesn't happen every day...
Plus, Adrienne is featured in a new ad campaign for her employer, so her picture debuted in this month's in flight magazine. I am so proud of her. She has been working hard not only to recruit more female major airline pilots to the Girls With Wings site, but also to open up more conversations about Mommies With Wings, being more than just a pilot, because there is so little conversation about women pilots and their trials of having families, too.