Ms. Lynda Meeks of Cleveland, OH was honored as a 2007 inductee into the International Forest of Friendship, in Atchison, Kansas during ceremonies in June. The Forest is a living, growing memorial to the world history of aviation and aerospace.

Ms Meeks has made many contributions to aviation as a military aviator, commercial pilot and educator. She was commissioned as a second lieutenant in the Army’s Aviation branch in 1992. After flight training she was stationed in Heidelberg, Germany for 3 1/2 years, and was trained for fixed wing aircraft flying throughout Europe and Southwest Asia. She attended the Military Intelligence Advanced Course and was Flight Operations Officer in an Aerial Reconnaissance unit out of Ft Bliss, TX, doing counter drug operations. After leaving the active Army in 1999, and while a Mesa Airlines captain, she joined the Ohio Army National Guard to return to flying helicopters. She is currently a Beechjet pilot at Flight Options, LLC, a fractional airline.

In addition to her fulltime job with Flight Options, she is the president of Very Important Pilots, LLC and the founder of Girls With Wings™, a movement to encourage more young girls to develop an interest in aviation (http://www.girlswithwings.com/) and to know their opportunities better. Lynda has also founded Generate LIFT, Inc., a non-profit organization created to encourage youth to achieve their personal and academic aspirations by emphasizing STEM (Science, Technology, Engineering and Mathematics) Education (http://www.generatelift.org/).

She also makes presentations at schools and other educational forums where she can make known her goals for increasing educational goals through the use of aviation, to include: “Cleared for Liftoff, A New Generation of Women in Air and Space,” presented by The International Women's Air & Space Museum (IWASM), The Women at Work museum's exhibit "Women Who Fly," "Girls Rock-et," a joint NASA Glenn Research Center/Northeast Ohio Girl Scouts event, and the National Conference on Aviation and Space Education. She is sponsored by the Lake Erie Chapter of the Ninety-Nines, the International Organization of Women Pilots.

The International Forest of Friendship was a gift to America on the Nation’s 200th birthday (1976) from the City of Atchison (Amelia Earhart’s birthplace) and the Ninety-Nines. It is made up of trees representing all the 50 states and 35 countries around the world, including a “moon tree” grown from a seed taken to the moon on Apollo 14. Among the more than 1200 honorees are such internationally recognized flyers as Amelia Earhart, Charles Lindbergh, the Wright Brothers, Sally Ride, Eileen Collins, and Chuck Yeager. The public is invited to the induction ceremonies which are held during the 3rd weekend of June (June 20-22, 2008). More information about the Forest, and points of contact are at http://www.ifof.org/
1 comment: Links to this post

This 8 day tour I haven't been flying. My employer is short of "Flight Planners" and so I have been in the office all day from 6am til 3pm filing flight plans.

Wikipedia says flight plans are: Flight plans are plans filed by pilots with the local Aviation Authority (e.g. FAA in the USA) prior to flying. They generally include basic information such as departure and arrival points, estimated time, alternate airports in case of bad weather, type of flight weather instrument flight rules or visual flight rules, pilot's name and number of passengers. In most countries, flight plans are required for flights under IFR. Under VFR, they are optional unless crossing national borders, however they are highly recommended, especially when flying over inhospitable areas, such as water, as they provide a way of alerting rescuers if the flight is overdue. More information here: http://en.wikipedia.org/wiki/Flight_plan

We use http://www.jetplan.com/ to file a couple of hundred flight plans a day (more with changes and cancellations). This program has the performance information for each of our aircraft programmed in, so all we have to do is input the departure and arrival points and passengers. We provide the pilots with the current weather and NOTAMs for the time that we file the flight plan, but the pilots are still responsible for checking this information - it may have changed or there might be something NOTAM'd that might affect their ability to actually do the flight.

NOTAM or NoTAM is the quasi-acronym for a "Notice To Airmen". NOTAMs are created and transmitted by government agencies under guidelines specified by Annex 15: Aeronautical Information Services of the International Convention on Civil Aviation. A NOTAM is filed with an aviation authority to alert aircraft pilots of any hazards en route or at a specific location. The authority in turn provides means of disseminating relevant NOTAMs to pilots.
NOTAMs are issued (and reported) for a number of reasons, such as:


Software is available to allow pilots to identify NOTAMs near their intended route or at the intended destination. http://en.wikipedia.org/wiki/NOTAM

Visit the store at https://www.shop.girlswithwings.com/splashPage.hg to see our new items! 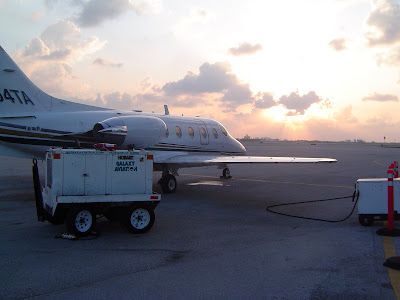 Hello all,
Last tour I took this picture in Palm Beach, FL, on one of our very early morning days. I wanted to show you the GPU, or ground power unit. These provide electrical power to the airplane before the engines are started and without running down the aircraft battery. They may be powered by gas, like the one on the left, or by electricity, like the smaller one on the right.
This way, we can turn on all of the radios (so we can get our clearance and plug it into the FMS, flight management system) and especially in FL, turn on the air conditioner! Unfortunately, they are rather loud, and not very environmentally friendly.
Some of the larger aircraft have APUs, or auxiliary power units, which is like an extra engine in the airplane. They are much louder than GPUs, but if I had one, I sure would be using it.
Here's a little more info from Wikipedia: http://en.wikipedia.org/wiki/Auxiliary_power_unit 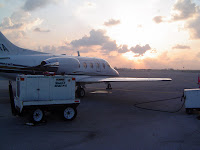 An aircraft APU is a relatively small, self-contained generator used to start the jet engines, usually with compressed air, and to provide electricity, hydraulic pressure and air conditioning while the aircraft is on the ground. In many aircraft, the APU can also provide electrical power in the air.
A gasoline piston engine APU was first used on the Pemberton-Billing P.B.31 Nighthawk Scout aircraft in 1916. The Boeing 727 in 1963 was the first jetliner to feature a gas turbine APU, allowing it to operate at smaller, regional airports, independent from ground facilities.
Although APUs have been installed in many locations on various military and commercial aircraft, they are usually mounted at the rear of modern jet airliners. The APU exhaust can be seen on most modern airliners as a small pipe exiting at the aircraft tail.
In most cases the APU is powered by a small gas turbine engine that provides compressed air from within or drives an air compressor (load compressor). Recent designs have started to explore the use of the Wankel engine in this role. The Wankel offers power-to-weight ratios better than normal piston engines and better fuel economy than a turbine.
APUs fitted to ETOPS (Extended-range Twin-engine Operations) are a critical safety device, as they supply backup electricity and compressed air in place of the dead engine or failed main engine generator. While some APUs may not be startable while the aircraft is in flight, ETOPS compliant APUs must be flight-startable at up to the aircraft service ceiling. Recent applications have specified starting up to 43,000 ft (≈ 13,000 m) from a complete cold-soak condition. If the APU or its electrical generator is not available, the airplane cannot be released for ETOPS flight and is forced to take a longer route.
APUs are even more critical for space shuttle flight operations. Unlike aircraft APU's, they provide hydraulic pressure, not electrical power. The space shuttle has three redundant APUs, powered by hydrazine fuel. They only function during powered ascent and during re-entry and landing. During powered ascent, the APUs provides hydraulic power for gimballing of shuttle's engines and control surfaces. During landing, they power the control surfaces and brakes. Landing can be accomplished with only one APU working. On STS-9, two of Columbia's APUs caught fire, but the flight still landed successfully.

Hello! I am sitting in Rockford, IL, where we had some minor work done on the airplane (the passenger seats were getting stuck in the aisle - and FAA regulations require that during takeoff and landing they are at the most outboard position as to not block the exits). 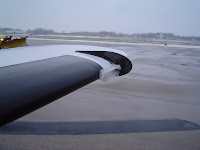 So I was taking advantage of our time here to clean off my flash drives and I found a bunch of pictures that I took this winter. 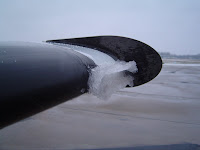 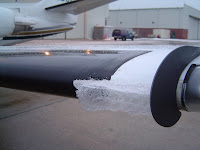 issue that we diverted into our headquarters/maintenance base for. 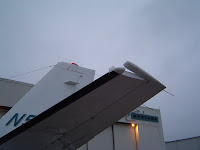 We needed to burn off some fuel (you can take off at a higher weight that you can land sometimes, and sometimes the length of the runway 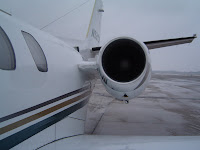 determines that you must be lighter than you had originally planned), 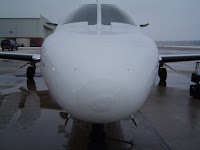 so we did some turns in holding. When we landed, I took pictures of the accumulated icing... 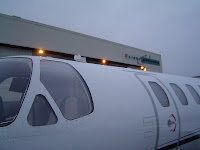 Ice on the airframe reduces the lift produced by the airplane because it disturbs the airflow. That is why airplanes need to get deiced before takeoff. The statistic I remember is: even a light coating of frost can reduce lift by 30%! For safety reasons, better to do it than not.

A view of the inside

Hey! I just realized I've never shown you the inside of the Beechjet that I fly. It only holds 8 passengers (if someone is willing to sit on the "potty"), but it's pretty comfy for the 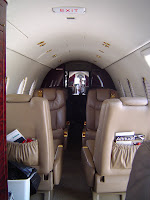 usual 1 or 2 people that we carry. We've spent this tour thus far mostly in the northern midwest; Minnesota, Wisconsin and South Dakota. We spent last night in Rapid City, and I was impressed with the town and it's residents. Especially all of the furry ones; deer (saw them on the running trail), cows, and ground hogs (I think the locals probably would like to see fewer of these).

I've got some pictures in the hopper, so I hope to be able to post a few times this week. Things are just busy; I'm going to Atchison, KS, to be inducted into the 99s International Forest of Friendship, and after the next tour, going hiking in Utah for a week. Then, OSHKOSH! in July. IF you're going to Oshkosh and would like to help us out at our booth, we have a camper with some extra room where you could stay. Email me at admin@girlswithwings.com if you're interested.
No comments: Links to this post