It is still August, right? 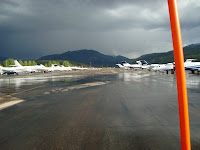 We spent the night yesterday in Colorado, where it was not a very nice evening weatherwise. The ceiling and visibility was obviously good enough to get in there, where we had some passengers (and their dogs) to drop off. We had to stick around for a while to get the airplane ready again, to include a ride in a golf cart over to the stock locker to get items for the airplane (it took a lot longer because a certain presidential candidate's security detail closed off that part of the ramp). The picture was taken on the ride back to the airplane to drop off the stock (snacks, drinks, etc.). We then packed up our bags to await a hotel assignment.
Once we were released to go to the hotel, we went to a nice resort up in the mountains at an altitude of 9000 ft. It's not often I'm looking to turn on the heat in my hotel room in August, but one of the windows in the room was stuck open! I didn't mind so much, since I like the feeling of snuggling down into the covers in a cold room. Unfortunately, I wanted to go running this morning on a nature trail the folks at the front desk had told me about. When I got up at about 5am, it was rainy and cold. I went to the beginning of the trail, which dipped down into the bushes. I had to pass, since the last thing I needed this morning was a muddy slide on my butt in the dark! Instead I just went for a walk on the streets, and believe me, going up and down a mountain road at 9000ft above sea level was enough of a workout - I was breathing pretty hard. 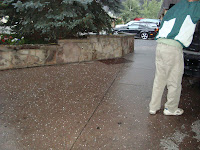 Once we all got ready to go to the airport in the shuttle, the skies opened up with a bunch of hail! In august! You could see everyone's breath. Brr. Just a little taste of the winter to come.
Again, another reason to love the Citation X. That Auxiliary Power Unit also puts out heat! So much better getting ready for work in a warm airplane.