Darn. No flying today - as of yet. I'm assigned standby duty at the hotel (luckily its a nice one - though no good running routes any where nearby). I thought I might tell you about my other birthday festivities; taking my four year old niece, Kate, camping. Yes, I have a wonderful sister that lets me do just about anything with her daughters (within reason obviously). I combined this camping trip with an EAA flyin at Sandusky Airport on Sunday; hence the connection to the Girls With Wings blog. 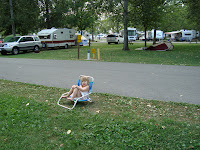 Kate and I went up to a KOA campground on saturday afternoon, setting up the tent first thing. (In case you didn't know, the first three rules for a 4 year old are: "no shoes in the tent, keep the door zipped shut, and don't touch the sides of the tent" - you'll know why in a bit.) It's not easy to set up a tent with a toddler. I found myself saying, "don't!" much more than usual. I try to limit myself to saying this only when bodily injury or equipment damage was a possible consequence, and with long tent poles and stakes - it often was. She eventually resigned herself to trying out the best place for her chair. 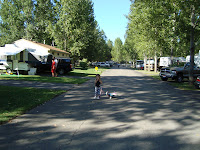 We went to the pool for a little swimming (this was always my favorite part of a KOA campground when I was young) and then Kate practiced her bike riding skills. She just got the training wheels off. She falls every 100 feet or so, but she's a good sport. Unfortunately, where there aren't scabs on the girl, there's a bruise. Kate is always an accident waiting to happen, but I love her bravery! Besides, campgrounds are a good place to practice bike riding. People are usually more alert looking for kids running around than they are in most neighborhoods. 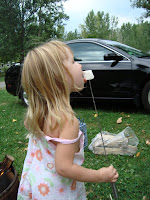 After a little playtime at the campground we went back and put hot dogs over the fire. Those, with some chips and a juice box makes a wonderful meal for a girl this age; not so much for me, but I managed. Then we did a little roasting of marshmallows for s'mores. Kate does not like any brown whatsoever on her 'mallows. Good thing they're cheap. I could only eat so many of the ones that didn't meet her exacting standards and the rest were sacrificed to the campfire. I am not a good camp cook. I limit myself to things that can be cooked to any level of done-ness and still eaten safely. Gourmet dinners are not usually in my repetoire under any circumstances (ie., at home over a stove), so you don't get much better with me at a campsite. Breakfast, btw, was simply milk and cereal! 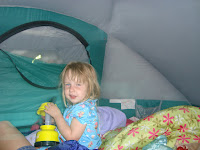 About this time we started getting ready for bed, as dark clouds started to roll in. The forecast, btw, had not called for rain. Well, about the time we finished brushing our teeth at the restrooms, the skies opened up with an impressive display, and we had to run back to the tent in the rain. I feared that Kate would be inconsolable and I'd end up driving around looking for a hotel room, but she seemed to hardly notice (except that I kept reminding her not to touch the walls of the tent). The biggest problem was trying to read her bedtime story over the noise of the storm. Until the morning, that is, when I lifted up our air mattress and found Lake Erie, Jr. Everything was soaked. I was lucky I was able to just throw everything in the car and dry it out after I got home. 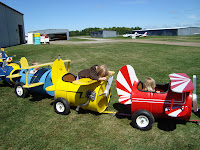 After a leisurely morning getting ready at the showers (Kate didn't quite know what to make of all the people in the shower building - all the women thought she was so cute), we went off to the Fly In at Sandusky. (Wikipedia: A fly-in is an event normally held at airports where pilots are invited to fly their aircraft to the airport where it's held to put it on display for visitors and fellow pilots and to meet with other people.) Kate loves airplanes and helicopters, so she was very excited to see all of the planes flying in over the campground, knowing she was going to see them up close the next day. It was very cold, giving us a taste of the autumn right around the corner (*sigh*). Like any proficient pilot, she still accomplished a thorough preflight of her airplane.
After a huge pancake breakfast - the best darn pancakes and sausage you can get anywhere for 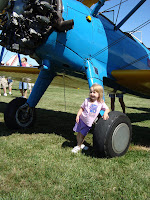 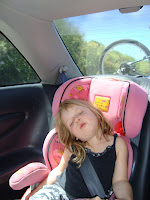 All in all, a great weekend. I love spending time with my nieces, doing things with each of them that my sister would have a rough time doing with all three at once. I am going to take 7 year old Delaney camping and canoeing before the summer is out, and next time I will probably take Kate and 3 year old Marie out camping together for two nights. Kate, though clearly exhausted on the drive home, didn't think we had spent enough time together. She sobbed when she saw her mom, realizing it was time to go back home because she "wanted to stay with Auntie Lynda." I have to make such plans during my days off, even though nearly all of my time away from my full time job is spent on Girls With Wings and getting the volunteer organization, well, organized. Even though GWW is a labor of love for me, it does take a lot of time and energy. I don't want to sacrifice the special times with my nieces.