We'd like to interrupt our regularly scheduled blog posts  about AcroCamp for a particularly timely notice...
Tomorrow is the launch for the Women's Transcontinental Air Race Classic! 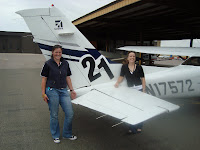 I participated in the race last year and blogged about it in a series of posts starting with this one.
I had the time of my life and hope to participate again next year. I know so many of the wonderful women participating this year that I hope you will visit the Air Race Classic website and see more about the FIFTY EIGHT teams this year (last year there were fewer than 40!) traveling June 22 to 25 on a 2157.7 nm/2483.0 sm trip from Fort Myers, FL to Frederick, MD. There is even a team fundraising for Girls With Wings:  Team Michigan 2010.
This is an amazing annual event that I wish more people in the general public were aware of and followed. Please spread the word!

The Teams and their websites:
(Girls With Wings Role Models are linked to their bio pages)

So as you can see, an amazing group of racers! If you're wondering what the "Collegiate designation means, the Air Race Classic makes a special effort to include collegiate women in the race. ARC welcomes teams to enter the collegiate division of the race. To be eligible for the collegiate division, at least one member of the team must be a student at the sponsoring college or university. Review the list of college teams that have raced previously. Read stories from past collegiate racers. Is your team in need of additional resources and finances to fly the Classic? Get some ideas on how to make it happen for you.

The Race ends on June 25th at 1700 - meaning every team must be across the finish line at this point (it's not a first one there wins kind of race  - each leg is tallied). There is a huge celebration planned at the Frederick Aiport, home of AOPA, which has been organized by Lin Caywood. Website.  I plan on being there with a table talking about Girls With Wings. I can't wait to congratulate all of the Racers!
And who knows? Maybe I can find a partner for next year's race...
No comments: Links to this post

Chapter 2 of The AcroCamp Recap

My first tweets from AcroCamp were, “Sitting in the FBO waiting for my turn to go fly upside down....” and "I knew this was going to happen. My stomach is starting to roll in anticipation of flying. I'm NOT nervous. I'm NOT nervous.” But then, I knew from my previous experience doing spins in a tomahawk that sometimes the “leading up to” made the actual “doing” that much worse. My twitter friend, Pilot2B, sent me this illustration as encouragement. [Sorry, the bumper sticker is only available in the greasy side down version.]

Barry took me out first to a Citabria to head out to the practice area. A Citabria is a two place airplane, which I'm used to, but with tandem seating, which I'm not. For Acrocamp, the camper was sitting in the front seat and the instructor in the back. The airplanes were fitted with cameras right in our faces, as well as on the wing strut to get a better angle. Additionally, our Lightspeed headsets were recording our every word. [Just so everything I’m saying here can be verified.] Once we were strapped in (did I mention we were wearing parachutes?), and the reality of what I was about to do came pressing down on me, one of my buddies, Will Hawkins showed me a little video he had on his iPhone.

Now who wouldn’t want to go fly aerobatics after that?


p.s. if you don't know who the woman in the video is you must not be involved in aviation AT ALL other than reading my blog. Go to her website and then come back.

Barry is also a helicopter pilot and he compared a lot of what he was telling me to do in the taildragger to flying a helicopter. First, there’s a stick (not a yoke as in most airplanes) similar to the cyclic in a chopper - which demands a light touch – don’t want to stir the soup making the airplane do what you want to do. Second, the rudder pedals also demand small variable inputs. Just as in the helicopter, I had to tell myself to RELAX and unclench my thighs, bend my legs, and use just my toes. Lightly. Whatever it takes, and no more.

After takeoff we climbed up to altitude and leveled off. I had to do this, not the autopilot, as I am used to using. Barry had me look out the left window and align the camber of the wing with the horizon (to start) and wow, what a different sight picture. There was sky and ground everywhere. Compared to the forward view in what I’m used to flying, I saw what should have been a 20 degree nose down pitch. I kept climbing flying out to the practice area because I kept wanting to get the nose somewhere toward the horizon. Had to remind myself to look at the left wing (this comes into play a lot in aerobatics as you’ll see later).

What the sound recorders won’t pick up during this portion of the flight is the little voice in my head. There was a scaredy-cat in my head saying, “I can’t do this. I can’t. I’m going to open my mouth and use my out-loud voice and just tell Barry I want to go back to the airport. I quit.” Only, I couldn’t form the words. Paralysis? I don’t think so. It was really the not wanting to pull up to the hangar doors and have everyone ask me why I was back so early that made me keep my mouth shut so no such words were recorded. The camera might reflect this drama playing out in my face, though. Not sure I want to see it, though. And my Facebook post when I returned was, “Just finished my first flight in a tail dragger, the Citabria. At first during the flight as the airplane was just kind of burbling in the sky, I thought, "man, I can so not do this." But I am motivated by thinking there's just no way I am going to go back there in defeat.”

But I also had a group of Facebook friends looking out for me. I couldn't let them down, too!

Jan: You GO, Girl!! Once you've had that taste of taildraggin', you'll never think twice about it. It's REAL flying. By the seat of your pants, literally. My first tailwheel flight was last September, got my endorsement in January, and now I'm taking acro lessons! Wait until you solo in the Citabria for the first time - you will be soooo excited. YOU CAN DO IT!! :D

Sarah: I grew up in a PA-12 Super Cruiser and a PA-16 Clipper. All these little tri-gear airplanes are like lawnmowers compared to a real airplane. :)

Michelle: Go Lynda...you can do it.

Robert: Can't go wrong if you have Don or Barry in the back. I got my first tailwheel flight in with Don last year.

Ken: I learned to fly in tail draggers...

Cheryl: That's my girl! See me sitting there in MY citabria! I love that airplane! Kam: You're a fearless woman and an inspiration to me. Thanks for these status updates!

Linda: Got my tailwheel a few years ago. You CAN do it!!!! And you'll come to love it!

Denise: But you MUST! Some of us are out here living vicariously through YOU!!! YOU GO GIRL!

Lou: Congratulations on finding out what those foot rests are for!! Once you've dragged your tail you'll realise tricycles are for babies!!

I'm trying to keep these chapters brief, so next post I'll cover the actual maneuvers...
No comments: Links to this post 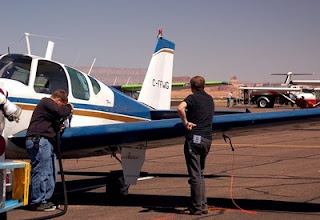 If you look very carefully, can you see what's in this guy's back pocket? Well, there's a reason for that...

In an earlier post, I spoke of being a Girls With Wings crewmember and mentioned a couple of members of my Canadian fan club who were doing such a great job promoting GWW on their travels. I found out that they were doing this after receiving an email from a woman in Georgia who signed up for a membership. She wrote me saying:


"Well, I actually only heard about this website a couple of days ago. I work at an FBO and a pilot came in and asked if I knew any little girls who would be interested in flying. I told him that I have a six year old daughter and he gave me the flyer and two little tattoos for her. He also showed me the picture of his granddaughter in the flyer. I thought that was really neat. I thought what he was doing was great, giving out flyers and letting people know about the website. So since I work at an FBO and have access to a lot of pilots and passengers coming through, I am going to hand out flyers and let them know about the website. This is going to be how I support the flight plan and let other little girls know that this is out there. If that man had never let me know, my daughter would be missing out on all of this."

So here's a picture of the flyer and the said granddaughter. Of course I knew exactly who this was. This friend from Canada been one of my greatest supporters from day one. So I wrote him an email to ask him. Just to be sure. Because there are a lot of guys out there that do plug Girls With Wings. He has sent tons of pictures of Jaime, Jhennifer and Faith (and Connor!) for me to use on the website and brochures. I see him every year at the Oshkosh booth, but unfortunately rarely get a break to catch up with them. (BTW, we'll be in booth 1058 this year - a little ways off from the old one.)


Mike was on a trip in their Debonair with his wife from Canada to the southern U.S. as an early opportunity to thaw out a bit. Here was his response:

Thanks so much for forwarding that letter from the FBO girl in Brunswick GA. She was very interested in your efforts to make little girls aware of their potential in aviation & technology; I think she will introduce her daughter to flying now. It continues to amaze me that even folks that already have a connection with flying don't think to get the girls involved.

I stick a brochure on every airport 'cork board' I stumble on & talk to 'flying people' about your efforts. They're always intrigued, especially women who have girls in their family. We'll continue passing along 'the word.'

And clearly he continued to do so. I just got an email from him wrapping up his trip. After you finish gawking at the Grand Canyon, note Donna's t-shirt.

Mike says, "Over the 8 weeks we had fun talking to a lot of nice folks who appreciate what you're doing Lynda." No wonder he says he needs more brochures and tattoos!  Again, thanks to Donna and Mike and all of the other folks that help with promoting Girls With Wings. I couldn't do it without you.
No comments: Links to this post