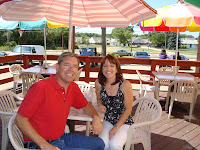 Today I had a fabulous lunch at a Mexican restaurant (I love Mexican food!). Better yet, I got to have lunch with an old friend. Ken, who now lives in Phoenix, said the friends you make at the regional airlines are the good ones - once you get to the major airlines, you don't bond so much with pilots you fly with - you're always switching crews. With a major airline, like the one Ken flies for, your schedule will not be the same as the rest of the crews. So the whole crew can change from leg to leg!

But Ken and I met when we were both pilots for a regional airline flying the Beech 1900s. Ken was my First Officer for a while - the best one I would say. He is a very proficient, professional pilot and an all around great guy. He had some time in the Cleveland area, so we met for lunch, at which time he made a very generous contribution to the Girls With Wings Scholarship in memory of his flight instructor, who just passed away recently. Look for more information to be posted on the scholarship page. Many thanks to Ken, his wife Laurie (also a pilot), and their son, James, for their support.

Whenever I think of Ken, I think of a funny story. In the 1900, the FO had to do the passenger briefing while the Captain sits up front and completes the paperwork, and for one particular leg, we only had one passenger. Ken was crawling into the seat so that we could crank the engines and go, and the passenger said to Ken (referring to me), "Oh, is she just learning to fly?" As if a pilot (even on a regional carrier) would be just starting out. Ken immediately replied, "No, she's the boss." The passenger, realizing now I was the Captain, tried to recover by saying, "Well, I figured because she was sitting in the left seat, and uh, well, uh...." We let the conversation just die out and we got on our way.