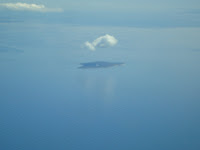 On the first flight of this tour, we flew from the "mainland" USA to the one of the islands off the east coast. Enroute, I took a couple of pictures of clouds that had formed over the various islands we were passing over, but had not formed anywhere else over the water. I kind of assumed that it had something to do with land absorbing and staying warmer than the surrounding water...? So I typed in a search for "Cloud Formation over Islands" and found this great site, Teachers' Domain: Multimedia Resources for the Classroom and Professional Development. You can watch a video, too! 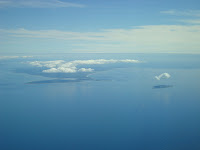 Air near the ground is also warmed by conduction — the direct transfer of energy between objects in contact by the collision of their molecules. However, air is not a very good conductor. A more efficient mode of energy
transfer within the atmosphere is convection — the transfer of heat through the movement of matter. As a region of surface air is warmed, the molecules move
faster and the air expands and becomes less dense. Less dense air rises through the cooler and denser air above it in the process of convection. These parcels of rising warm air, called thermals, can lead to the formation of cumulus clouds.

As air rises, it moves into an environment of lower atmospheric pressure, and as a result, it expands further and cools. When the temperature of the air drops below the dew point point, the rate at which invisible water vapor condenses onto cloud condensation nuclei — tiny particles in the air such as dust, sea spray, and industrial aerosols — exceeds the rate of evaporation of liquid water. Billions of these tiny water droplets or ice crystals may develop and collect to form a cloud. When the droplets or ice crystals grow too large to remain suspended in the air, they fall to the ground as precipitation.

Because warm air is less dense than cold air, and moist air is less dense than dry air, the warm and moist air of the tropics provides an ideal environment for convection. Along coastal locations in the tropics, convection is often easy to observe on a warm, sunny day. While cumulus clouds are found over both land and water, they tend to form over land earlier in the day than over water. This is because water has a higher heat capacity than land — it takes a lot more energy to raise the temperature of water than to raise the temperature of land. As a result, land warms more rapidly than water and is able to heat the surface air to a higher temperature.
Whether or not cumulus clouds bring about thunderstorms depends on the stability of the surrounding atmosphere. If the air around the cloud is stable, vertical air motion and cloud growth is inhibited. However, if the air around the cloud is unstable, vertical motion is enhanced and the cloud continues to grow, potentially into a
thunderhead.