Another day on the road 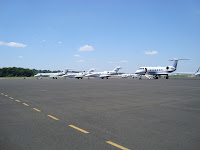 In my hurry to get breakfast at the hotel this morning (we had a relatively late 8:18am show to make up for our previous pre-dawn shows), I posted the pictures from yesterday onto the blog with no text. Sorry, redo....

So, we started the day in New Jersey where the ramp was crowded with airplanes. I think this is an awe-inspiring sight. We had to taxi over to another FBO (sometimes our passengers prefer one over the other) where we saw this poor little (beaver, groundhog?) trying to escape off the ramp. I can't imagine his or her disorientation created by 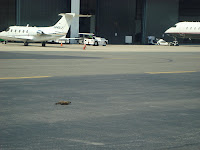 very large, very metallic, very LOUD creatures moving around him. Occasionally you will see an animal, stray dog or fox, loping down a taxiway. Some airports have warnings saying "deer in vicinity of airport" so many pilots will "buzz" over the runway before coming in to land. Hitting a deer with an airplane can be catastrophic (if you've seen the damage to a car, imagine an airplane). If there are personnel working at the airport we let them know and they'll chase the "intruders" away.

We flew up to Ontario, Canada, where we spent a few hours awaiting passengers attending a meeting. Its beautiful up there in the spring and summer, but I can imagine the winter is wicked. The Captain noticed that instead of using wood 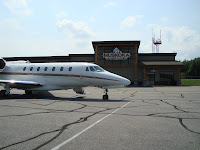 or rubber chocks (usually triangular blocks placed around the gear to prevent the airplane from rolling while parked (we don't leave the parking brake set when we leave the airplane because the line crew may need to move it when we're not around to unlock the door), they used fat lengths of rope. My theory is that the typical chocks would freeze and break in the winter months and they had just gotten used to using the rope all year round. Any other theories?