Ever visit an airport and see the name of the airport painted in big white letters on the ground ? Maybe a colorful "starburst" looking design? That, my friends, is a compass rose. These are part of a larger program of navigational aids for pilots. My local chapter (Lake Erie) of the 99s painted the compass rose at Geauga County Airport (7G8) a couple of days ago. The rest of this posting includes excerpts from an article written by Ellen Nobles-Harris and published in 99NEWS Magazine March/April 2002.
MARKING THE WAY
Next time you go flying, look down at the airport and the surrounding buildings. You may notice markings pointing to the airport and will probably see the airport name painted on the field. This program of identifying airports to pilots was started as the National Air Marking Program. This program was the first U.S. government program conceived, planned and directed by a woman with an all-woman staff. The program was a part of the Bureau of Air Commerce. 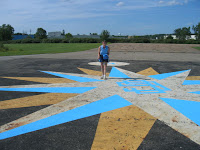 In 1933, Phoebe F. Omlie was appointed Special Assistant for Air Intelligence of the National Advisory Committee for Aeronautics - NACA (forerunner of the National Aeronautics and Space Administration - NASA.) The following year Phoebe convinced the chief of the Airport Marking and Mapping Section of the Bureau of Air Commerce to institute a program where each state would participate and better identify its towns and cities from the air.
Under the program, a state was divided into sections of 20 square miles. Where possible, a marker with the name of the nearest town was painted on the roof of the most prominent building at each 15-mile interval. If the towns were far apart, white painted ground markers, such as rocks and bricks, were used.
At the time that the program was established, few pilots were flying on established airways or had the benefit of radios. With the aid of markers, even the most inexperienced pilots could determine where they were. 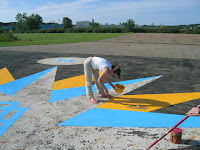 The program was funded as a system of state grants from the Works Progress Administration. Not only was this the first appropriation of funds specifically set up to aid private pilots, but it was also hoped that the program would provide jobs for the unemployed and would establish valuable permanent airway aids. By the middle of 1936, 30 states were actively involved in the program, with approvals given for 16,000 markers at a cost of about one million dollars.
In 1935, Phoebe chose five leading women pilots as field representatives for the program; Louise Thaden, Helen Richey, Blanche Noyes, Nancy Harkness and Helen McCloskey. At the time, these women were very well known in aviation. Phoebe continued as head of the program until it was well on its way to being a success. She then returned to her duties at NACA. But then came the war. After the bombing at Pearl Harbor in 1941, the U.S. Government determined that marked airports along the east and west coast were obvious targets for enemy identification and attack. Consequently, Blanche Noyes, who had set about the work of marking some 13,000 sites, went about the work of blacking out those very markings she and her team of women pilots had diligently created.
In a Christian Science Monitor magazine article in 1943, Blanche remarked, "Once in a while I get a little jittery wondering if some particularly zealous airplane spotter might mistake me for an enemy ship and shoot me down and ask questions later, for of course I'm flying constantly over restricted areas. Too, one small mistake in my clearance papers might cause me to make a `sudden' landing, for if is my experience that the Ground Observers Corps is certainly doing a crack job as far as aircraft spotting is concerned!" 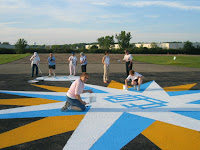 After World War II, Blanche Noyes was in charge of the air marking division of the Civil Aeronautics Administration. Blanche believed that it was critical to not only replace the airport markings that were removed during the war for security reasons, but also to add even more navigational aids. And thus the work began all over again.
Today, Ninety-Nines carry on the tradition and fulfill the need for airmarkings by volunteering their time to paint the airport names, compass rose symbols and other identifications on airports. Some of the letters in the airport name can be 50 feet tall. And, Ninety-Nines airmark airports based on need, which many times takes them far from their local areas. When Ninety-Nine members in Alaska did airmarkings last year, some members traveled up to 300 air miles to meet at the designated airport.
Funding for the airmarking program no longer comes from the national government. After Blanche Noyes's husband was killed in the crash of his Beachcraft Staggerwing, Blanche devoted her energies to the Air Marking Program as a way of overcoming her grief. She became one of its most ardent supporters, so much so that when the federal funds for the program ran out, she flew all over the country to gain financial support from local chambers of commerce and civic groups. 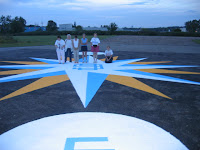 Our chapters are still doing this. For example, the Anchorage (Alaska) Municipal Airport Advisory Commission asked the Alaska Chapter to mark a reporting point. A bright yellow theater which had been a reporting point for years was converted to a school and painted gray, making it a tough one to spot. With support from the FAA and local aviation businesses, they were able to educate the school district on why they wanted to paint a name on the roof. They had to work with the contractor who had installed a new roof so that the warranty would not be voided. The paint recommended cost $1,600. The paint was funded by Merrill Field businesses. This effort received some wonderful coverage from two local TV stations.
And the airmarking efforts of The Ninety-Nines involves more than putting names on rooftops. For example: The Colorado Chapter painted the numbers and aiming points on a new 7,000 foot runway. Many chapters have painted compass roses at airports to be used for swinging airplane compasses.
Since The Ninety-Nines is a charitable organization, we normally ask the airport or local or state government to supply the paint. Some airport businesses will also supply the paint. Normally the chapter will provide rollers and tools and the women and men to do the marking and painting. 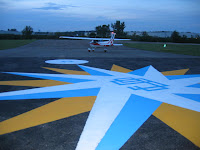 So the next time you're flying, look down and imagine flying your biplane over those small towns in the late 1930s and how comforting it must have been to see that runway with your destination's name clearly painted on it. For that you could thank early members of The Ninety-Nines for leading the way in the airmarking efforts of the 20th century. If you would like further information on airmarking, please contact our Airmarking Chair.
You can see by the pictures that a compass rose is huge and requires coordinated team work. A compass rose usually requires two days to lay out the pattern and paint it.