I had this picture in the blog previously, but for a different reason. Given the last blog post, I wanted to talk a little bit more about altitude. 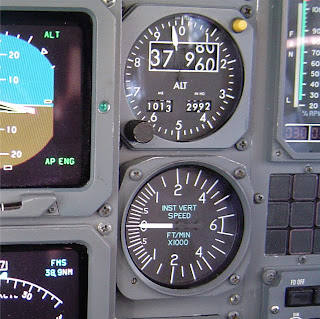 Pilots know their altitude because of the altimeter (abbreviated on the instrument as "alt"). The large number display is our altitude, which is the same as the pointer readout (currently sneaking below 40,000 feet). The knob in the lower left hand corner changes the numbers in the lower windows. Since the readout is 29.92, the 40,000 feet is not the reading above the ground but a standardized flight level (FL400).

Ok, so to explain. When pilots are getting ready to take off, they get an altimeter setting at the airport. This altimeter setting is adjusted for the temperature and pressure (for example, if there is a low pressure front moving through, it may be, say, 29.68 or alternatively a higher pressure indication of something like 30.13). Then the window will give us the altitude of the airport, like 791 feet in Cleveland. This is above the level of the sea, called Mean Sea Level (791ft MSL). That way, as you climb out and see 4791 feet, you know you're 4000 feet above the ground (or above ground level -- AGL).

This information is important when we are descending into an airport. We need to know exactly how far above the ground we are -- especially when we are in the clouds. When we do an instrument approach, the co-pilot will call out the airplane's altitude. For example, on an approach that takes us to within 200 feet above the ground, the copilot will think of 991 feet as the go-around point (using Cleveland again) and call out "1000 feet" when she reads 1991ft. Usually also 500, 300, 200, and 100 feet above this "decision altitude" are also called out. Sometimes the math is a pain, but it's very accurate.

When we level at say, 7000 feet MSL, we are given altimeter settings by air traffic control as we travel along. This keeps everyone consistently at their given altitude, regardless of the hills or valleys below us. At the higher altitudes, fluctuations would make this very confusing (and dangerous). So in the United States, we change to the standard altimeter setting 29.92. Now everyone is flying at Flight Levels but not necessarily the same as above mean sea level (MSL). Even though we're not flying at exactly 40,000 feet MSL, at least everyone is flying with the same margin of error. What's important here is that there is 1000 feet of separation between the aircraft!

Hopefully I have explained this well. For more information, Wikipedia has a good explanation of Flight Levels. http://en.wikipedia.org/wiki/Flight_level