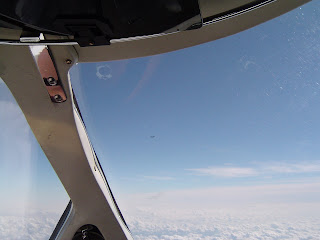 Remember recently how I was talking about telling Air Traffic Controllers (ATC) that we saw "traffic on the fishfinder?" This is pilot-speak for our TCAS (Traffic Collision Advisory System) and the fact that it operates similarly to the radar fisherman use to find fish under water.

This is what it looks like when ATC says "Options 525, you have crossing traffic at your 10 to 11 o'clock, 1000 feet above you." Can you see the black speck in the picture to the left?

We just so happen to be "in the clear" as opposed to "in the clouds," so we can actually see this traffic. If we couldn't we would rely on our TCAS to show us this traffic when we select the TRFC button (see the green light over this button?). Our TCAS shows this picture after the other aircraft passes over us: 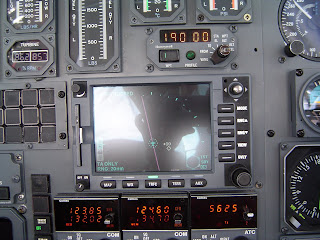 See the diamond with the +10? This is saying that we have traffic 1000 feet above us. You can see by the display above the screen that we are at 19,000 feet above sea level, as opposed to just "above the ground." This distinction deserves a seperate discussion, so more on that later.


The pink line on this screen is the route we are flying. The reason the nose of the airplane is slightly off to the right is because we have a cross wind from our right. We are compensating for the push to the left the wind is giving us. If we pointed straight to our destination, we would go left to where we intended. It's like swimming across a river with a current. If we tried to swim straight across, we'd end up farther down the bank than we wanted. So we would swim slightly (or in proportion to the strength of the current) upstream so we could end up on the opposite bank exactly where we wanted.


See all of the orange numbers in the displays below the screen? Those are the radio frequencies we transmit on. More on these later, too!