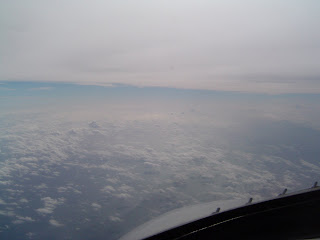 As all Girls With Wings know, clouds form when the invisible water vapor in the air condenses into visible water droplets or ice crystals. From the ground looking up, we usually notice "clouds" and don't think about that there may be several layers of clouds. The picture taken in flight shows we can fly between layers of clouds.

On top of us was a layer of Altostratus (AS), a cloud belonging to a class characterized by a generally uniform gray sheet or layer. Altostratus is caused by a large air mass that is lifted then condensed, usually by an incoming frontal system and can be found over wide-spread areas. Altostratus clouds are potentially dangerous, because they can cause ice accretion on aircraft.

Beneath us was a stratocumulus cloud (SC), belonging to a class characterized by large dark, rounded masses, usually in groups, lines, or waves, the individual elements being larger than those in altocumuli, and the whole being at a lower altitude, usually below 2,400 m (8,000 ft). Weak convective currents create shallow cloud layers because of drier, stable air above preventing continued vertical development.

Generally stratocumuli bring no precipitation or only drizzle / light rain or snow at best. However, these clouds are often seen at either the front or tail end of worse weather, so may indicate storms to come, in the form of thunderheads or gusty winds.
As you can see, there are several different ways clouds are formed.
For example:
Clouds can be formed when the air is cooled below its saturation point, when the air comes in contact with a cold surface or a surface that is cooling by radiation, or the air is cooled by adiabatic expansion (rising), along warm and cold fronts (frontal lift), where air flows up the side of a mountain and cools as it rises higher into the atmosphere (orographic lift) or by the convection caused by the warming of a surface by insolation (diurnal heating) when warm air blows over a colder surface such as a cool body of water.
But clouds can also be formed when two air masses below saturation point mix. Examples are breath on a cold day, aircraft contrails and Arctic sea smoke.
Also clouds are formed when air stays the same temperature but absorbs more water vapor into it until it reaches saturation point. This information from Wikipedia, Clouds.

According to those in the know, like David R. Cook of the Atmospheric Research Section int the Environmental Research Division at Argonne National Laboratory:

The atmosphere can have several layers that are fairly well isolated from each other and can have separate dynamics, including lifting and convection, although convection above the lower level of the atmosphere is normally much weaker.The atmosphere also has a fairly complex temperature structure, so that temperature is increasing with height in some layers (thereby squelching the production of clouds) and decreasing with height in other layers (where clouds are more likely to form because air can more easily rise if heated some). Different characteristics of the air in the different levels can therefore produce different clouds or the same kind of cloud in the different layers, depending on the dynamics of the layer. Read all.