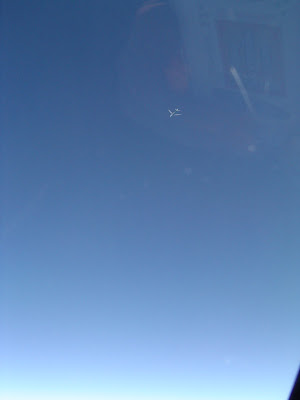 I've posted three pictures in this entry showing "close" proximity to other aircraft in flight. I say "close" because you have to consider how large the aircraft is, and how small it appears. All of these aircraft are at least 1000' vertically distant (automation makes this very reliable), and usually some horizontal seperation. However, not a lot, because there are routes in the sky that pilots fly. Just like an airborne highway system. But because we don't have to worry about damaging our suspensions by going off-roading, we can accept short cuts to save time.

These charted "jet" routes (there are also V-Victor airways at lower altitudes) connect various navigation aids around the world. They used to be between NDB (non directional beacons--like radio stations putting out a signal) and VORs (very high frequency omnidirectional receivers), but are more and more relying on GPS designated intersections.

Pilots usually use paper "maps" to navigate their way around (given permission by Air Traffic Controllers of course), produced by Jeppesen. 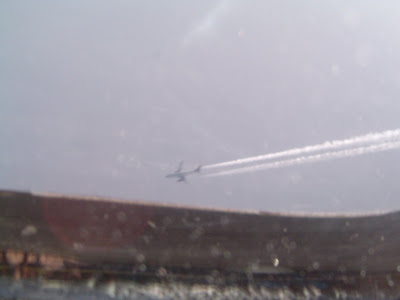 Jeppesen (formerly Jeppesen Sanderson, and still used today) is an American company that specialises in aeronautical charting and navigation services, flight planning, pilot supplies and aviation training. The company is a subsidiary of Boeing Commercial Airplanes. Jeppesen also publishes related software, some of which is used on its electronic flight bag product line. 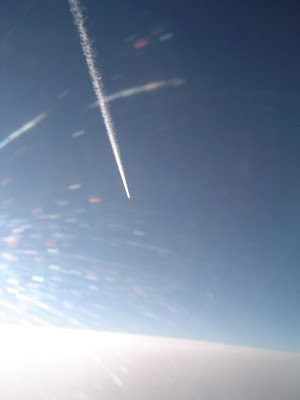 The company was founded in 1934 by Elrey Borge Jeppesen, a pilot himself working for Varney Airlines, who was the first to make aeronautical charts for pilots to navigate in flight. The information he collected and the charts he drew were at first only for personal use, but fellow pilots quickly saw the benefits of using these charts and
Jeppesen started selling copies of his chart book for 10 dollars. Other pilots started to collect data on their own routes and handing this to Jeppesen for him to include in his navigation book.

United Airlines, the airline Jeppesen worked for in the late 1930s after Varney airlines had merged with several other companies to form United Airlines, was one of the first airlines to start using Jeppesen's charts. After a while the chart business started taking up so much of Jeppesen's time that he quit his job as a Captain and became dedicated to making charts.