I received this photo from a pilot I work with: 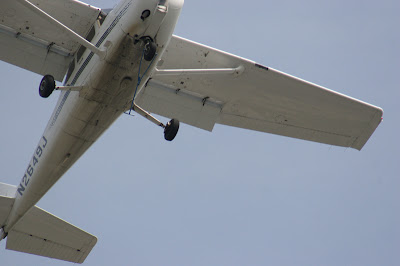 Look very closely... See the front (or nose) gear (or tire assembly)? Do you see the blue object that comes from either side of the nose gear and trails down to appear just under the main landing gear on your right? This is called a tow bar, and they vary in size from one like this, which allows people to maneuver this airplane (a Cessna 172) on the ground by hand without starting the engines. Of course, there are also tow bars for huge or heavy aircraft, but they have to use a tug (similiar in philosophy to tugboat, but more like a tractor) instead of human power.


Theoretically, this tow bar should NOT be on the aircraft in flight. Pilots have to do a pre-flight before they can jump in the airplane and take off. Upon approaching an aircraft, a pilot will determine by the aircraft's general appearance if there might be something wrong. The pilot will look for any major damage (sometimes the aforementioned tugs will run into an airplane), any puddles from leaking fluid, evidence of birds nesting in the aircraft or engines, etc. Then the pilot will get down and dirty, checking in and under every part of the airplane. This includes checking oil levels, testing the fuel for any contamination, and checking for all required bolts, nuts and screws! This is a hands on inspection, and most pilots walk away from a preflight needing to wash their hands from touching things to check for excessive play (does the assembly move more than it should?). Often pilots even have to wash their shirts, especially if they've checked under the wing for the gear/brakes and stand up before they're clear of the wing.


The preflight takes as long as a pilot needs to complete it. In the early stages of pilot training, a good instructor will take a long time to teach a student a preflight, because the implications are huge. If a pilot notices a problem on the ground, it will avoid trouble in the air. For example, if you notice there's oil pooled below the airplane parked on the ramp, wouldn't you rather get oil on the ground, right there at the hangar, than have to declare an emergency because the engine seized in flight? Sometimes things are left unsecured, like cowlings (panels that secure around the engine to streamline the airframe and protect against damage). Sometimes things are left sitting in dangerous places, like a tool left behind that can slide down and jam controls.


In later stages, clearly the pilots of a jumbo jet don't climb up to examine the engines. Licensed mechanics or A&Ps (for Airframe and Powerplant Technician) have an inspection schedule for the various systems on the airplane. Plus, the pilots can monitor their cockpit gauges to monitor for an abnormality in their operation in flight. Pilots still have to check around the rest of the airplane to make sure there are no other problems, like flat tires.


Sometimes things do escape people's notice. A pilot can be tired or in a hurry and miss something obvious, like the towbar, or because of inexperience. The problem with this pilot's situation is going to be durign the landing because the towbar could interfere with the gear. I don't know what the outcome of this incident was, but I guarantee you this pilot never forgot to check this again!


p.s. I am not above missing things on a pre-flight either, by the way. One day I was checking on the CE560 I fly for work and there was already a tug on the airplane so they could move it around before we took off. Well, as a result I kind of glossed over checking the nose of the airplane, and missed the pitot tube covers left on the airplane.

The pitot tube, shown in this picture, supplies the air pressure used for various systems in the aircraft. The tube is usually just off to the side of the nose on the airplane, and to protect it from contaminants, a cover is applied during extended parking. The cover fits over the tube and has a long red trailing strap that says "Remove Before Flight." Good thing the other pilot noticed my error before we took off, because without the air supplied from this tube, our instruments (shown in picture) would have been inaccurate, creating an inflight problem that could be blamed entirely on "pilot error." Mine, to be exact!