This is a picture of the wing of the airplane. So, you may be wondering, what are the wings black on the front (leading) edge? That's not just paint. Those are de-ice boots. Here is another picture so you may be able to see them more clearly. Pilots are required to check these before each flight to make sure there are no cracks or wholes to prevent their proper operation. What do they do? 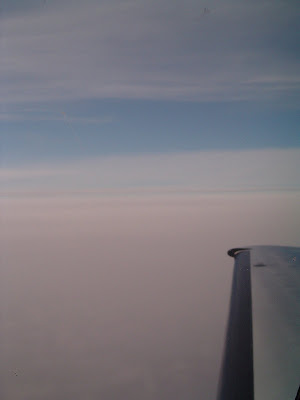 From Wikipedia: A deicing boot is a device installed on aircraft surfaces to permit a mechanical deicing in flight. Such boots are generally installed on the leading edges of wings and control surfaces (e.g. horizontal and vertical stabilizer) as these areas are most likely to accumulate ice and any contamination could severely affect the aircraft's performance. A deicing boot consists of a thick rubber membrane that is installed over the surface. As atmospheric icing occurs and ice builds up, a pneumatic system inflates the boot with compressed air. This expansion in size cracks any ice that has accumulated, and this ice is then blown away by the airflow. The boots are then deflated to return the wing or surface to its optimal shape.

While deicing boots have undoubtedly saved many lives and have permitted flight into known icing conditions, it is important to note that they are unable to handle extremely severe icing. In these cases, ice can accumulate faster than the boots can shed it or, ice can accumulate on non-booted surfaces to the point where it weighs the aircraft down until it is overweight and no longer flyable.

Deicing boots are most commonly seen on medium-sized airliners and utility aircraft. Larger airliners and military jets tend to use heating systems that are installed underneath the wing's leading edge, keeping it constantly warm and preventing ice from forming.