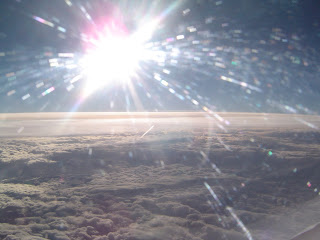 I was taking this picture to again show another airplane flying past, but it reminded me of something I think about every once in a while in the large "greenhouse" of a cockpit. Yes, it can get really hot sitting up there in the front seat.

Although like most everyone else I tanned my skin until my early 30s when I started seeing the effects of the sun damage (Genes don't help either). I no longer spend time out in the sun unprotected. But every time I feel like I'm cooking up there at 37,000 feet, I think, this can't be good for my skin either. In the mornings before I go fly I use sunscreen. But I wonder, does it just feel hotter, or is there something to be concerned about?

I know that the atmosphere is thinner, so certainly exposure to radiation is greater (some say 100 to 300 times). Does this mean more cancers in frequent fliers? What about melanoma from the sun?

Category: Environmental & Background Radiation — Aircraft and Space Radiation
The following question was answered by an expert in the appropriate field:

Q: What are some of the risks or "worries" that someone may have if deciding to become an airplane pilot? I would appreciate it if the answer would be related to physics and radiation, rather than simply the risk of an accident.

A: Since you've sent this question in to the Health Physics Society for an answer by an expert in radiation safety, I will assume that your question is primarily directed to the issue of the radiation risks encountered by flight crewmembers. In your question, you used the term "airplane pilot" rather than "airline pilot." If in fact you're asking about becoming a licensed pilot in the realm of "general aviation" rather than commercial flying, be assured that at the low altitudes used by private pilots in light aircraft the radiation risks are negligible.

For airline pilots, the situation is different. In both Europe and the United States, airline flight crewmembers have for years been considered radiation workers, although most US-based flight attendants and pilots are unaware of this classification. The acceptable radiation exposure for a radiation worker is substantially greater than that for a member of the general public—a factor of 50 times more in the United States, 20 times more in the European Union.

The rationale for this large difference is not only predicated on the difference between the acceptability of a radiation exposure to a compensated employee compared with an "innocent bystander," it also considers several other important areas of dissimilarity. Radiation workers must be at least 18 years old, while the public is composed of all age groups, including children who may be more susceptible to harm. Another factor is the availability of ongoing health monitoring for radiation workers. And there is the simple fact that radiation workers must willingly accept their increased levels of risk or seek other employment.

In this context, airline pilots receive exposures that are well within the accepted dose limits for occupational exposures, limits recommended by organizations such as the International Commission on Radiological Protection. Pilots flying high-altitude, high-latitude routes do receive exposures that put them in the top five percent of all radiation workers when ranked by dose. Even so, their exposures are generally no greater than half of the value which is permissible under the more strict European (compared with US) occupational standards.

For male and female pilots, the primary risk of many years of exposure at these levels is the possibility of a small increase, about 1%, in their lifetime risk of cancer. For female pilots, issues related to pregnancy may also apply (other answers on this site address those concerns). Although the presumed increase in cancer risk is small, it is the right of all flight crewmembers to make a choice about the personal acceptability of this risk based on sound scientific principles and educated decision making. If you become an airline pilot, you should insist that your employer provide the educational materials necessary for you to understand this issue thoroughly.

In an article in Plane & Pilot magazine: http://www.planeandpilotmag.com/content/pastissues/2001/sept/rising.html

European studies have shown that pilots, flight attendants and frequent fliers have a higher incidence of various forms of cancer due to radiation exposure. The FAA agrees that airlines should provide information about radiation exposure to crewmembers, but a 1984 petition for rulemaking concerning radiation was denied.

The article also says that many studies have shown a large increase of melanoma in the pilot population over the general population, but the studies aren't clear yet whether it comes from the additional exposure during flying or from a pilot's lifestyle.

There are other risks to flying then, in addition to the possibility of crashes or bad airline food. Definitely something to think about...