Yesterday started telling you about x14, an airport in La Belle, Florida, USA . I searched "airport identifiers" and got distracted by figuring out how different airport IDs originated. I covered Large, Medium and Small hub airports and their IDs, but left it up to you, the reader, to research the IDs for smaller airports.

So just real quick, here is what an Location Identifier is (from Wikipedia). The ones that we are most familiar with (such as the ones in yesterday's post) are the International Air Transport Association sets of 3-letter IATA identifiers which are used for airline operations, baggage routing, and ticketing. There is no specific organization scheme to IATA

identifiers; typically they take on the abbreviation of the airport or city such as MNL for Manila Ninoy Aquino Airport. (I tried to find something that said what those long sticky labels meant, but they're really just bar codes printed on machine like the one left. On the one pictured, DCA means Washington, DC, and CO 158 is the flight number from Continental. Pic from Airline Lost Your Luggage! Now What?)

Aviation professionals usually use The International Civil Aviation Organization 4-letter location indicators. These are used by air traffic control agencies to identify airports and by weather agencies to produce METAR weather reports. The first letter indicates the region: K for conterminous United States, C for Canada, E for northern Europe, R for the Asian Far East, and Y for Australia. The remainder of the identifiers are established at the national level. Examples of ICAO location indicators are RPLL for Manila Ninoy Aquino Airport and KCEF for Westover Joint Air Reserve Base.

The Federal Aviation Administration identifier is a three-letter or four-letter alphanumeric code identifying United States airports. They were developed in the 1960s, replacing an old system that relied on plain language, teletype station identifiers, and weather reporting codes. For nearly all major airports, the letters are alphabetic three-letter codes, such as SFO for San Francisco International Airport. Minor airfields typically have a mix of alphabetic and numeric codes, such as 8N2 for Skydive Chicago Airport and 0 B5 for Turners Falls Airport. Private airfields have a four-letter identifier, such as 1CA9 for Los Angeles County Fire Department Heliport.

So to get back on topic, the captain and I were pretty surprised when we got assigned a trip to X14; we had to look it up to find out where it was! Then we had the hardest time picking out the airport until we were nearly on top of it. X14 is an airport that is "uncontrolled." There is no tower controlling traffic, so the ATC service remotely located will ask a pilot when she has the "airport in sight." When she does, ATC will clear the crew to proceed on their own. The crew then makes radio calls announcing their arrival to anyone operating at the airport (it would be a whole other post to talk about these operations - let me know the interest level). 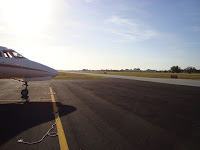 Although there are airport diagrams to give guidance to pilots taxiing around an unfamiliar airport guidance, they sometimes just depict buildings, and it can be pretty confusing to know where to park. To the left is a picture of our airplane's nose. As you can see, we were lucky. There is actually a sign saying "Fuel." That's a big clue!

It was a tight squeeze as we taxied on to this ramp and did a 180 turn to end up right here on the end of the tarmac with our nose pointed back towards the taxiway. If personnel are available to "marshal" or direct you in, it helps, but a lot of times at smaller airports you're on your own! 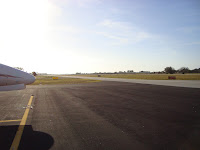 Pulling back from the view a little bit, you can see more of the airport. If you look to the right from the fuel sign, across the taxiway there is a sign that just looks like a black rectangle. Then just to the right of that are four lights in the ground in a row. These are called PAPI lights, or Precision Approach Path Indicator lights.

According to the AIM: The precision approach path indicator (PAPI) uses light units similar to the VASI (be patient...) but are installed in a single row of either two or four light units. These systems have an effective visual range of about 5 miles during the day and up to 20 miles at night. The row of light units is normally installed on the left side of the runway and the glide path indications are as depicted.

VASI, or Visual Approach Slope Indicator, is a system of lights so arranged to provide visual descent guidance information during the approach to a runway. These lights are visible from 3-5 miles during the day and up to 20 miles or more at night. The visual glide path of the VASI provides safe obstruction clearance within plus or minus 10 degrees of the extended runway

centerline and to 4 NM from the runway threshold. Descent, using the VASI, should not be initiated until the aircraft is visually aligned with the runway.