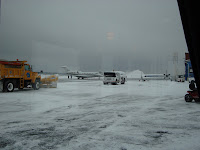 Yesterday I did a quick blog entry about a scenario when de-icing can be unsuccessful. The following pictures are from the same airport but the next morning. We walk into the FBO and see our airplane surrounded by the requisite equipment during winter operations. There's a plow clearing the ramp. BTW, ramps can get mighty slippery because of the prohibition against using salt around airplanes (salt is corosive). Some places put down sand, but that's of limited use and makes a mess! You may notice that the fuel truck parked here is plugged into an engine block heater. Not only was it snowy - it was cold, too!

So first, just like I did with my car, someone went out and brushed off the loose snow off the wings so that the de-icing fluid doesn't have to melt as much snow. This in itself has dangerous repurcussions, since there is a possibility that the airplane can tip backwards if the weight of the snow on the tail is too much. This happened to one of my company's airplanes when some pro-active FBO employees thought they would clean off the airplane before the crew arrived. The entire story was published is published in the local paper, Sun Valley Online.


But back to our aircraft (which 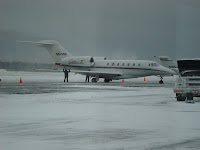 thankfully stayed on all three gear assemblies until we required it to take flight). The FBO then brought up their deicing sprayer. Deicing fluids come in a variety of types, and are typically composed of ethylene glycol or propylene glycol, along with other ingredients such as thickening agents, wettening agents, corrosion inhibitors, and colored, UV-sensitive dye. Propylene Glycol is more common due to the fact it is less toxic than ethylene glycol. (Majority of this information is culminated in Wikipedia entries for de-icing fluid and de-icing.)

As I mentioned in yesterday's post, we were not able to depart the airport the night before because the snow was coming down faster than the FBO could remove it. This was immediately 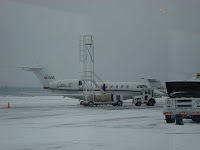 obvious to us because we could see the melted snow immediately refreezing. But the FAA has also published tables on how long de-icing fluids are effective based on certain conditions. You can see an example Hold Over Time (HOT) chart here.


Deicing fluid performance is measured by holdover time, which is the length of time an aircraft can wait after being treated prior to takeoff. Holdover time is influenced by the ambient temperature, wind, precipitation, humidity, aircraft skin temperature, and other factors. For Type I fluids, the holdover time is only about five to 15 minutes, so the aircraft must take off immediately or else wait to be deiced again. Type IV fluids generally provide a holdover time between 30 and 80 minutes. 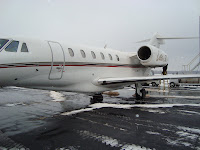 This FBO only had TYPE 1 fluid, have a low viscosity, and are considered "unthickened". They provide only short term protection because they quickly flow off surfaces after use. They are typically sprayed on hot (130° - 180° F) at high pressure to remove snow, ice, and frost. Often they are dyed orange to aid in identification and application (You can see the orange snow in this picture).

Again, this is a de-icing fluid. Many FBOs also have other types of fluid. Deicing fluids containing thickeners (types II, III, and IV) are also known as anti-icing fluids, because they are used primarily to prevent icing from re-occurring after an initial deicing with a type I fluid (which was our problem the night before).


Type II fluids are "pseudoplastic", which means they contain a polymeric thickening agent to prevent their immediate flow off aircraft surfaces. Typically the fluid film will remain in place until the aircraft attains 100 knots or so, at which point the viscosity breaks down due to shear stress. The high speeds required for viscosity breakdown means that this type of fluid is useful only for larger aircraft. The use of type II fluids is diminishing in favour of type IV.

Type III fluids can be thought of as a compromise between type I and type II fluids. They are intended for use on slower aircraft, with a rotation speed of less than 100 knots. Type III fluids are gaining acceptance in the regional and business aviation markets.

Type IV fluids, commonly referred to as anti-icing fluids because an aircraft must first be deiced prior to a Type IV fluid application, meet the same viscosity specifications as type II fluids, but they provide a longer holdover time. They are typically dyed green to aid in the application of a consistent layer of fluid.


And Tracy left this comment after yesterday's post: The majority of the time we get de-iced twice. First they go over the whole plane with what is called Type I fluid. It is pretty much to wash off whatever accumulation is on the plane. Then they go over the wings and tail with a Type IV fluid that is thicker and sits on the surface, melting the snow/sleet that is still coming down. With two trucks working on it(one on each side of the plane), they completed a 747-400 in 25 minutes. Then we had a little over an hour to get airborne before the effect of the de-icing expired. That time limit is determined by the type of fluid, the rate the precip is falling and the outside air temperature.