The other day on my commercial flight home from a tour, every time the flight attendant tried to make an announcement, there was this painful screech. Luckily it was an RJ700 and the other FA at the front of the airplane finished the briefing on another microphone. This is an example of audio feedback, which occurs when a sound loop exists between an audio input (for example, a microphone or guitar pickup) and an audio output (for example, a loudspeaker).


Ha - you thought "negative feedback" meant someone had insulted my blog, didn't you?

This sometimes happens with a pilot's headset, or when a pilot tries to use the handmike. I'll be honest, I've never been sure how it happens and why - so I'm learning here too. It has never happened in the CE750, but in previous airplanes 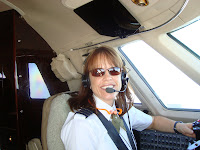 It used to happen most often when I was talking with the handmike and listening over the overhead speakers, which you can see in the picture to the right - it's that white circle on the ceiling (although this is a CitX pic). BTW, the black squarish thing above my head is a sun shade that rotates down on that silver bar above the window, so it will slide around to where the sun is coming in. The handset is located in a bracket on the side of the yoke "stem," for lack of a better word. It looks just like the ones you see cops using in their squad cars; it's on a long coil and you push a button to transmit.

As you can see in the other picture, I've got the yoke right in front 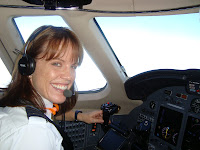 of me, and then there is a stand that goes into the floor between my feet. Some yokes go toward the front of the cockpit; some airplanes even use a joystick on the side of the cockpit on the armrest!

Most audio feedback results in a high-pitched squealing noise familiar to those who have listened to bands at house parties, and other locations where the sound setup is less than ideal — this usually occurs when live microphones are placed in the general direction of the output speakers. Since we can't change the location of the mike or the speaker, we can try to use the speaker on the opposite side of the cabin. Or go to headset!

This is about all I could find on the subject. I know feedback happens under other circumstances in the cockpit talking on the radios, so any "feedback" is appreciated!