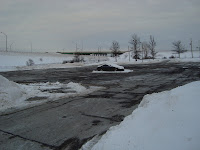 When I got home yesterday, this was how my car looked. Pretty sad and lonely, huh? I had parked way out here on a monday morning, and on saturday there wasn't as much traffic at the train station. I tried to clean off my car, but the snow banks around the car were a pain to stand in. Finally I thought to pull my car forward out of the snowpile and finish clearing the windows. And, yes, it started like a champ. I am so grateful to have an 11 year old, yet reliable, car. I also am very grateful that a neighbor snuck over and plowed my driveway while I was gone. It took me an hour just to do some fine-tuning of removing the snow on the drive, I can't imagine how long it would have taken me if I had to do the whole driveway. These are some methods of de-icing (though some might argue it was actually de-snowing). Since it is going to be 40 degrees today, I am hoping the rest of the snow and ice on my driveway will melt. 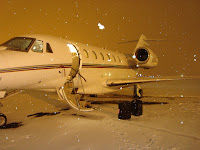 This is the kind of de-icing most non-pilots have to deal with, unless they are being delayed when taxiing out for their commercial flight. All pilots at some point will have to deal with aircraft deicing since even any frost adhering to aircraft surfaces can cause a 30% decrease in lift. Secondly, chunks of ice that seperate from, say, the wing, can be deflected into the engine and cause damage. Additionally, any frozen liquids may interfere with flight control movement. It's a safety thing.
Aircraft are also cleaned of snow by shovels, brooms and chemical applications of De-icing fluid (more pictures tomorrow). The aircraft may also be pulled into a warm hangar or parked in the sun (if available, obviously).
Deicing isn't completely infallible, however. First of all, as I was told by an old salt when I was still a regional airline pilot years ago, the deicing fluid used on that Beech1900 was blown off the plane at 80kts (before rotation speed). So, if weather conditions are really bad, deicing may not allow airplanes to take off anyway for fear that the airplane will ice over again. Also, depending on the application methods and type of fluid used, the precipitation can refreeze within minutes. The rampers who apply deicing fluid may never get ahead of the precip. This happened to me recently at an airport in Ohio.
Note: there is a difference between DEicing and ANTIicing. Wikipedia's definition.

De-icing is the process of removing frozen contaminant, snow, ice, slush, from a surface.

Anti-icing is the process of protecting against the formation of frozen contaminant, snow, ice, slush on a surface.

Deicing can be accomplished by mechanical methods (scraping, pushing); through the application of heat; by use of chemicals, known as deicing fluids, designed to lower the freezing point of water (various salts, alcohols, glycols); or by a combination of these different techniques. Deicing fluids are always applied heated and diluted.

Anti-icing is accomplished by applying a protective layer, using a viscous fluid called anti-ice fluid, over a surface to absorb the contaminate.

All anti-ice fluids offer only limited protection, dependent upon frozen contaminant type and precipitation rate. A fluid has failed when it no longer can absorb the contaminant and it essentially becomes a contaminant itself. If it fails it must be washed from the surface using a deicing fluid. 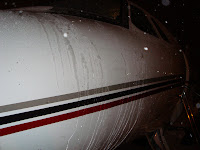 This is a picture of the nose of the airplane. As you can see, there are frozen rivulets down the surface of the airplane. The FBO had a very small, low powered deicing spray system, which just melted the snow. By the time they got around the whole airplane, the water had refrozen. Since it was snowing so hard, they could have lapped the airplane many times trying to remove this fluid, because they had no anti-icing fluid. So we just canceled the trip and went in the morning. Tomorrow I will show more pictures of the deicing process.