One really great thing about Oshkosh is meeting all of the people there that are so enthusiastic about aviation. A lot of the visitors at the booth are dads, who ask me how they can encourage their daughters to be as enthusiastic about aviation as the rest of us there at the airshow. I mean, really, what's more interesting? A good view or a good book? As an avid reader myself, I can tell you sometimes it's a bit of a toss-up!
I have mentioned before that I didn't grow up wanting to be a pilot. I'm not sure as a kid what I would have done with the 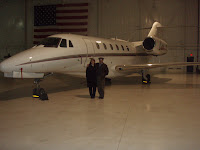 opportunity to fly in a small airplane even once, much less more often. I mean, by the time I started doing anything interesting, like jumping OUT of airplanes, I was already in college. My parents took us around the country in a little camper (yes, that's four kids and two parents in a Winnebago), and though it was a trial then, I look back with fondness and enjoy traveling to this day. I mean, who wants to hang out with your parents?? (This picture at right is of my dad and I standing in front of my airplane. I spent the night once in the town where he lives, so he got the nickel tour. His pictures are below and in an upcoming entry, too)
So I usually tell the dads to look for 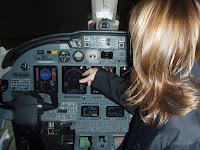 other kids their child's age. And for girls, find examples of women who are in aviation as well - so it doesn't look like a club just for middle aged men (Dads everywhere gasp - yeah, but we're *cool* middle aged men; we're pilots!). Ahem... Anyway. Here's a place to start: Girls With Wings Role Models. I, in fact, may even be a role model for my DAD. He hung out with me at the GWW booth last year again in Oshkosh and I think he's getting closer to getting a license himself. Something maybe a less intimidating than my ride.
And give it time, the girls will come around eventually. They may even secretly like it already - but it would be so uncool for them to 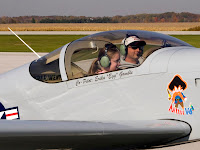 let you know. At the very least, dads, you are giving your daughter the opportunity of a lifetime - to do something very few people get to experience. If they don't grow up to be a pilot themselves, you may give them the inspiration to do something else "out of the box." And for you dads (and moms, of course) who don't own an airplane or don't have a pilot's license, there are many resources out there to introduce your daughter to the world of aviation. Stay tuned to Girls With Wings for an announcement of an exciting new program for this very purpose!
p.s. Co-pilot Egg, shown in picture at right was also in picture at top.