Do you remember the tragic crash of Golfer Payne Stewart's airplane in 1999? The nation watched in disbelief as the Lear 35 with a two person crew and four passengers stopped communicating with ATC and flew on autopilot until it ran out of fuel and spiraled into the ground in South Dakota. Less than 15 minutes after its departure from MCO and somewhere in a climb from FL 230 to FL 390, contact with the pilots had been lost. A military airplane soon flew out to check on the airplane and that pilot said, "that he could not see inside the passenger section of the airplane because the windows seemed to be dark. Further, he stated that the entire right cockpit windshield was opaque, as if condensation or ice covered the inside. He also indicated that the left cockpit windshield was opaque, although several sections of the center of the windshield seemed to be only thinly covered by condensation or ice; a small rectangular section of the windshield was clear, with only a small section of the glare shield visible through this area."

The Cockpit Voice Recorder (CVR) captured "the sound of an engine winding down, followed by sounds similar to a stickshaker and an autopilot disconnect, can be heard on N47BA's cockpit voice recorder (CVR), which recorded the final 30 minutes of cruise flight. The CVR also captured the continuous activation of the cabin altitude aural warning, which ceased at 1212:26 CDT." Because this accident would not have occurred without both the loss of cabin pressure and the failure of the flight crew to receive supplemental oxygen, the Safety Board considered possible reasons for both of these key events in the accident sequence.
Because the crew was already at a high altitude when they were still communicating with ATC, the NTSB has determined that there was mostly likely not a slow depressurization; there are too many indications in the cockpit for the pilots not to recognize this situation: symptoms of hypoxia, cabin altitude warnings, etc. (Hypoxia is the physiological state of insufficient oxygen in the blood and body tissue and may ultimately cause impaired vision, judgment, or motor control; drowsiness; slurred speech; memory decrements; difficulty thinking; and loss of consciousness and death.)
Pressurized aircraft cabins allow physiologically safe environments to be maintained for flight crew and passengers during flight at physiologically deficient altitudes. At cruising altitudes, pressurized cabins of turbine-powered aircraft typically maintain a consistent environment equivalent to that of approximately 8,000 feet by directing engine bleed air into the cabin while simultaneously regulating the flow of air out of the cabin. The environmental equivalent altitude is referred to as "cabin altitude."
This aircraft was operating under Part 135 regulations which requires:
(2) Whenever a pressurized aircraft is operated at altitudes above 25,000 feet through 35,000 feet MSL, unless each pilot has an approved quick donning type oxygen mask -
(i) At least one pilot at the controls shall wear, secured and sealed, an oxygen mask that either supplies oxygen at all times or automatically supplies oxygen whenever the cabin pressure altitude exceeds 12,000 feet MSL; and
(ii) During that flight, each other pilot on flight deck duty shall have an oxygen mask, connected to an oxygen supply, located so as to allow immediate placing of the mask on the pilot's face sealed and secured for use.
(1) Whenever a pressurized aircraft is operated at altitudes above 35,000 feet MSL, at least one pilot at the controls shall wear, secured and sealed, an oxygen mask required by paragraph (b)(2)(i) of this section.
(2) If one pilot leaves a pilot duty station of an aircraft when operating at altitudes above 25,000 feet MSL, the remaining pilot at the controls shall put on and use an approved oxygen mask until the other pilot returns to the pilot duty station of the aircraft. 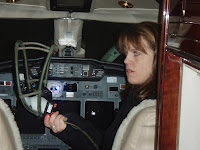 At left, I am demonstrating how the mask installed on a Citation X can deflect a stream of air to inflate the harness so it can be placed over the head (to operate properly, the pilot must remember to remove a headset). Releasing the levers will deflate the harness and secure the mask. It is a very tight fit, and not very comfortable, but for reasons explained in this post, a necessary evil. Pilots can communicate with each other and with ATC with a microphone integral to the mask, but it is not as clear as the ones in our headsets. Because of the tight fit, the mask presses against the face and makes talking difficult. 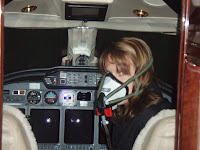 This is called "Time of Useful Consciousness," defined as the amount of time an individual is able to perform flying duties efficiently in an environment of inadequate oxygen supply. It is the period of time from the interruption of the oxygen supply or exposure to an oxygen-poor environment to the time when useful function is lost, and the individual is no longer capable of taking proper corrective and protective action. It is not the time to total unconsciousness. At the higher altitudes, the TUC becomes very short; considering this danger, the emphasis is on prevention rather than cure. In accordance with 14 CFR 25.1477(c)(2), flight crewmembers must be able to don the oxygen mask within 5 seconds for the mask to be considered quick donning. A TUC chart on Wikipedia displays TUC; for example, usually upon exposure to hypoxia at FL250, an average individual has a TUC of 3 to 5 minutes. A rapid decompression can reduce the TUC by up to 50 percent caused by the forced exhalation of the lungs during decompression and the extremely rapid rate of ascent.
In the NTSB review of the Payne Stewart accident, the FAA found that the Learjet Model 35/36 AFM did not have an emergency procedure requiring the flight crew to don oxygen masks immediately after the cabin altitude aural warning is activated. Because the AFM contains an abnormal procedure allowing the flight crew to troubleshoot the pressurization system before donning oxygen masks, the FAA noted that the flight crew may delay donning oxygen masks and become incapacitated.
If there had been a breach in the fuselage (even a small one that could not be visually detected by the in-flight observers) or a seal failure, the cabin could have depressurized gradually, rapidly, or even explosively. Research has shown that a period of as little as 8 seconds without supplemental oxygen following rapid depressurization to about 30,000 feet may cause a drop in oxygen saturation that can significantly impair cognitive functioning and increase the amount of time required to complete complex tasks. Prior problems with this aircraft's pressurization system had been addressed in the period before the accident. Full details in The entire NTSB transcript.