Well, my lighthearted post about exploding soda cans yesterday garnered the most confusion of any so far. Read the "Cold Weather Operations" post below and return here, if you'd like.

Yes, all Citation Xs have APUs. [Note that I have defined APUs and FBOs in the left hand column, since I use those abbreviations often. I will add to the list as they occur to me.] When I said yesterday that "Other aircraft without an APU can request a GPU - ground power unit, but this won't provide heat. Sometimes, especially for the airlines, you can get a ducting unit to pump hot or cold air into the cabin" I meant other airplane types. The ducting I was referring to was to distribute Pre Conditioned Air. The picture to the left is an example of one of these ducts from Reelcraft. These are usually attached under the jetway leading to a commercial airliner, though they can be mounted on carts for mobility.
Oakland International Airport (OAK) even touts the use of these units as going green:

APUs also serve an important function (yes, besides getting the cabin warmed up or cooled down). They act as the initial source of air with which the main aircraft engines are started. With an inoperative APU, the only way to start the engines is to use a "Huffer cart" which is one of my first blog posts. You can either use your search engine for "Huffer Cart" and observe my blog entry, Getting to know Citation-X, magically appear. Or view an answer on Wikipedia.
I was also asked via Twitter, "Well don't leave us in suspense: had the drinks been removed??" And I had to respond that I didn't remember. Probably not, since this quite a big production to get all of the drinks out of the airplane. The FBOs are prepared to handle 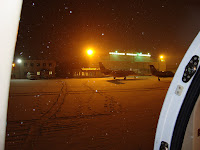 this request for assistance from crews and always have a variety of containers with which to haul the drinks into the hangar for the night (that is assuming the airplane won't fit, of course) and to bring them back in time for departure.
The picture here was out of our door during a snowstorm in Toledo (this picture will lead to another topic for a post soon). You can see the footprints leading to and from the hangar and the trail made by a beat up old garbage can with which this FBO toted the drinks back and forth.