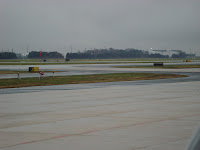 Finishing up with the runway, those white lights along the edge of the runway give the pilots information too. According to the pilot's "handbook," the Aeronautical Information Manual:
2-1-4. Runway Edge Light Systems
a. Runway edge lights are used to outline the edges of runways during periods of darkness or restricted visibility conditions. These light systems are classified according to the intensity or brightness they are capable of producing: they are the High Intensity Runway Lights (HIRL), Medium Intensity Runway Lights (MIRL), and the Low Intensity Runway Lights (LIRL). The HIRL and MIRL systems have variable intensity controls, whereas the LIRLs normally have one intensity setting.
b. The runway edge lights are white, except on instrument runways yellow replaces white on the last 2,000 feet or half the runway length, whichever is less, to form a caution zone for landings.
c. The lights marking the ends of the runway emit red light toward the runway to indicate the end of runway to a departing aircraft and emit green outward from the runway end to indicate the threshold to landing aircraft.
Believe it or not, if there is no tower personnel, so no one to turn on these lights, the pilots can do it for themselves (see chart).
Radio Control System
Key Mike____________Function
7 times within 5 seconds -Highest intensity available
5 times within 5 seconds -Medium or lower intensity (Lower REIL or REIL-off)
3 times within 5 seconds -Lowest intensity available (Lower REIL or REIL-off)
The control system consists of a 3-step control responsive to 7, 5, and/or 3 microphone clicks. This 3-step control will turn on lighting facilities capable of either 3-step, 2-step or 1-step operation. The 3-step and 2-step lighting facilities can be altered in intensity, while the 1-step cannot. All lighting is illuminated for a period of 15 minutes from the most recent time of activation and may not be extinguished prior to end of the 15 minute period (except for 1-step and 2-step REILs which may be turned off when desired by keying the mike 5 or 3 times respectively).
The green light you see there is from the airport beacon. Airport and heliport

beacons have a vertical light distribution to make them most effective from one to ten degrees above the horizon; however, they can be seen well above and below this peak spread. The beacon may be an omnidirectional capacitor-discharge device, or it may rotate at a constant speed which produces the visual effect of flashes at regular intervals. Flashes may be one or two colors alternately. http://www.halibrite.com/Beacon_refb_24_inch802A.html
The colors and color combinations of beacons are:
White and Green- Lighted land airport.
White and Yellow- Lighted water airport.
Green, Yellow, and White- Lighted heliport.
You can see the satelite view of the airport and it looks pretty easy to pick out. Who needs a beacon, right? Well, it doesn't just need to be dark to be hard to pick out an airport. Hazy weather conditions, surrounding buildings and streets, unfamiliar landscapes and the different perspective from being at a strange angle at altitude make it tough to find even large airports sometimes. A controller might tell a pilot, "Airport at your 12 o'clock and ten miles," and darn it if we can't see it until we're nearly on top of it!