Guess what! We get to revisit the series of the Dulles airport pictures. But this is on the OTHER side of our airplane... 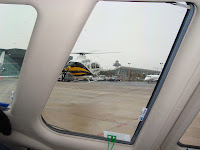 Part of the reason I took pictures of this helicopter was because it was so windy that day that the pilot was working hard to keep the greasy side down. I unfortunately didn't get any pictures that demonstrated this. I also am very fond of helicopters because that's what I learned to fly first. I didn't realize until this day that the litter in air ambulance helicopters (at least this particular model), access the cabin from the rear of the aircraft. It makes sense, because this helicopter is not all that big.

Wikipedia says: Air ambulance service, sometimes called Aeromedical Evacuation or simply Medevac is provided by a variety of different sources, in different places in the world. There are a number of reasonable methods of differentiating types of air ambulance services. These include military/civilian models, government-funded, fee-for-service, donated by a business enterprise, or funded by public donations. It may also be reasonable to differentiate between dedicated aircraft and those with multiple purposes and roles. Finally, it is reasonable to differentiate by the type of aircraft used, including rotary-wing, fixed-wing, or very large aircraft. The military role in civil air ambulance operations is described in the History section. Each of the remaining models will be explored separately. It should also be noted that this information applies to air ambulance systems performing emergency service. In almost all jurisdictions, private aircraft charter companies provide non-emergency air ambulance service on a fee-for-service basis. 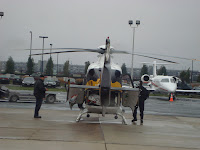 I do not have enough hours to qualify for any full time helicopter jobs (and then I wouldn't be able to fly the Citation X!). I've also heard that medevac pilots aren't told who they are going to pick up, because the hospitals don't want to add pressure to the pilots when they might not fly because of bad weather or other dangerous conditions. The industry is working on it though.
The Wikipedia article continues:

During the 1990s there occurred a trend of increasing numbers of air ambulance crashes, mostly involving helicopters. By 2005, this number had reached a record high. Crash rates from 2000–2005 more than doubled the previous five year's rates.[28] To some extent, these numbers had been accepted, as it was understood that the very nature of air ambulance operations meant that, because a life was at stake, air ambulances would often operate on the very edge of their safety envelopes, going on missions in conditions where no other civilian pilot would fly. As one side result, it should be noted that of all EMS personnel losing their lives in the line of duty in the United States, nearly fifty percent do so on air ambulance crashes. In 2006, the United States National Transportation Safety Board (NTSB) deems that many air ambulances crashes were avoidable[29], eventually leading to the improvement of government standards and CAMTS accreditation.[30]