Part 3 in the Series 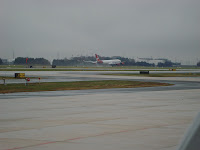 I'd like to talk some more about the runway, with thanks to this Virgin Atlantic Airbus 340. We are looking at 19L at KIAD. The 19, btw, refers to the compass heading looking down this runway, minus the last digit. 190 degrees is close enough. Here are the precise numbers. The L, or left, means there is a parallel runway, or 19R. It's designated below, Runway 1R/19L because if you were facing the other way, you'd be looking approximately 010 degrees and there is also a 1L, which is the same piece of concrete as 19R. Perfectly clear, huh?

This runway, according to the diagram in a previous post and the above description is approximately 11,500 feet long by 50 feet wide. The white number just behind the landing Airbus is a 9 in a black box, signifying that there is 9000 feet of runway remaining. Above it talks about "Touchdown point."

The handbook for pilots is the Aeronautical Information Manual. It is a lot easier to read than the FARs (the federal regulations for pilots shortened from Title 14 of the Code of Federal Regulations) and has so much interesting and valuable information. There is so much to know about flying that it's easy for some information to fall out as more is crammed in.

For this post, I am looking at Chapter 2. Aeronautical Lighting and Other Airport Visual Aids, specifically, Section 3. Airport Marking Aids and Signs. and finally, 2-3-3. Runway Markings. http://www.faa.gov/airports_airtraffic/air_traffic/publications/atpubs/aim/Chap2/aim0203.html

This would be the markings on this runway.

d. Runway Aiming Point Marking. The aiming point marking serves as a visual aiming point for a landing aircraft. These two rectangular markings consist of a broad white stripe located on each side of the runway centerline and approximately 1,000 feet from the landing threshold, as shown in FIG 2-3-1, Precision Instrument Runway Markings.
e. Runway Touchdown Zone Markers. The touchdown zone markings identify the touchdown zone for landing operations and are coded to provide distance information in 500 feet (150m) increments. These markings consist of groups of one, two, and three rectangular bars symmetrically arranged in pairs about the runway centerline, as shown in FIG 2-3-1, Precision Instrument Runway Markings. For runways having touchdown zone markings on both ends, those pairs of markings which extend to within 900 feet (270m) of the midpoint between the thresholds are eliminated.
So you could do the math and figure that this airplane touched down at 11,500 (the given length) - 9000 (the 9 on sign) = 2500 ft down the runway. Plenty of runway left! (I could get into a whole discussion of what runway length the regulations and specific aircraft manual requires based on airplane weight, runway conditions, wind, etc., but that would take another hour!)

Oh, and the airport diagrams come from http://www.airnav.com/. I had never noticed this information before, but it gives Airport Operational Statistics for the different airports.