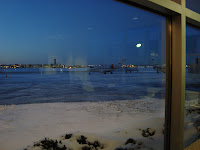 he FBO - pretty sure this was MKE.

Brrrr. It just looks cold. The Captain and I were just coming on to this airplane, so we weren't sure what we were going to find out there. One thing that we needed to think about was whether the drinks had been removed from the airplane the night before.

Wait, you thought I was going to talk about de-icing, or preheating the engine, or something similiar, didn't you?

Well, there are a lot of other considerations to operating in the cold weather. First, I am again grateful to be flying the Citation X with an APU. We can turn on this Auxiliary Power Unit and generate heat into the cabin so we are not doing our preflight duties in the cold. Other aircraft without an APU can request a GPU - ground power unit, but this won't provide heat. Sometimes, especially for the airlines, you can get a ducting unit to pump hot or cold air into the cabin.

Secondly, since the inside of the airplane will soon be cold soaked in such temperatures, it can get mighty cold inside. See this page for "cold soaked," a term often used but debunked by a seismologist at the Geophysical Institute, University of Alaska Fairbanks. Even so, it is

The Brazilian airframer [Embraer] says results were "very positive" as engines, systems, batteries and doors were tested for 12h at a temperature of -40°C (-40°F).

As a result of these subzero temperatures, the drinks that we have on board may also freeze, causing their containers (whether glass bottle, plastic bottle or aluminum can) to explode, causing a huge (and expensive) mess to clean. I tried to find an easy answer on why this happens and found - guess what - a million different hits on how to make your soda freeze, how baking soda freezes, how to make a fountain from Coke and Menthos, etc...

The best reference I found was here: .

Water has an unusual characteristic; in its solid form, it is less dense than in its liquid form. Thus, as it freezes, it expands slightly. This is why ice floats to the top of liquid water, rather than sinking to the bottom. With most other substances, if you were to put a solid piece of that substance into a container of that same substance melted into a liquid, the solid would sink to the bottom.This, also, is why a container of a water-based liquid (such as soda) might rupture when frozen. As the water freezes, it expands, taking up more volume, and if the container can't contain that increased volume, it bursts.

Budding scientists from 5th - 8th grade can do an experiment, Soda Sabotage, testing the effects of heat on a can of soda.