It should be obvious that not only should airplanes be able to fly, but they should also be able to takeoff and land. Or they shouldn't take off! Like the old saying goes, "Takeoffs are optional, landings are mandatory."

It also often goes unsaid that airplanes should also be able to come to a stop after landing. Many factors are used to calculate how much distance will be used for landing for a particular airplane under certain conditions; aircraft weight and temperature (which changes the speed at which the aircraft touches down), winds, runway slope, etc. And runway conditions. Standing water on the runways surface can slow an aircraft accelerating for takeoff, but it can also inhibit an airplane from decelerating on landing. Snow and ice can also lengthen runway distance by reducing traction, and further may cause a pilot to lose steering control! 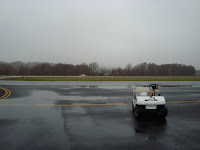 The first indication a pilot might have that the braking conditions or braking action is less than perfect is by looking out of the hotel room and seeing snow falling. This snow, of course, can be plowed, but just like on your driveway, it can't all be picked up and therefore will get packed down or iced over. Another indication is can be: "When tower controllers have received runway braking action reports which include the terms poor or nil, or whenever weather conditions are conducive to deteriorating or rapidly changing runway braking conditions, the tower will include on the ATIS broadcast the statement, “BRAKING ACTION ADVISORIES ARE IN EFFECT".” from the AIM. Section 4-3-8.
Further: During the time that braking action advisories are in effect, ATC will issue the latest braking action report for the runway in use to each arriving and departing aircraft. Pilots should be prepared for deteriorating braking conditions and should request current runway condition information if not volunteered by controllers. Pilots should also be prepared to provide a descriptive runway condition report to controllers after landing.
But what do tower controllers have to go on if no aircraft has landed for a while? They rely on ground vehicles being able to judge the braking action. The two pictures on this blog entry are of a pickup truck doing a runway check. Some vehicles have decelerometers, like what is available at Neubert Aero Corporation (their slogan, "We take the guesswork out of Reporting Runway Braking Action").

A decelerometer (DFD), pictured at left, is used to measure a short section of the runway; this is sometimes called a spot check. The decelerometer is a small device that is mounted inside a suitable ops vehicle. The vehicle is brought up to 20mph and then the brakes are applied resulting in the vehicle inducing a full locked wheel skid. The decelerometer then measures the peak horizontal g force during the skid. In low friction surface conditions, typical values would be less than 40% g.

How important is it that the pilots be made aware of the braking conditions of the runway? Recently, the FAA Flight Standards Division implemented a new policy for airplane operators engaged in air transportation that requires additional assessment of landing distance requirements based on the conditions present at the time of arrival. This policy requires that the flightcrew calculate their required landing distance accounting for the runway contamination type and depth or, most recent braking action report for the runway to be used under the landing performance assessment policy. Some aircraft will begin to be restricted when braking action reports of “fair” are received. With the current ATC threshold of “poor” for placing advisory information on the Automatic Terminal Information Service (ATIS), the flightcrews of these aircraft would not have any indication that they may be 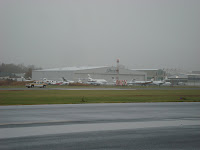 runway restricted until making radio contact with the tower controller. This late information could add additional workload for the flightcrew at a critical time of flight and, potentially, lead to an unnecessary go-around with the resultant effects on the ATC workload. Therefore, we are taking action to change the trigger when “BRAKING ACTION ADVISORIES ARE IN EFFECT” on the ATIS to any time a “fair” or worse braking action report is received. Full text.

A real live example of the consequences of NOT recalculating the effect of the braking action report can be found in this NTSB report. This is a very interesting retelling of a chain of causes that led to an runway overrun.
On April 12, 2007, about 0043 eastern daylight time, a Bombardier/Canadair Regional Jet (CRJ) CL600-2B19, N8905F, operated as Pinnacle Airlines flight 4712, ran off the departure end of runway 28 after landing at Cherry Capital Airport (TVC), Traverse City, Michigan. There were no injuries among the 49 passengers (including 3 lap-held infants) and 3 crewmembers, and the aircraft was substantially damaged.
The National Transportation Safety Board determined that the probable cause of this accident was the pilots’ decision to land at TVC without performing a landing distance assessment, which was required by company policy because of runway contamination initially reported by TVC ground operations personnel and continuing reports of deteriorating weather and runway conditions during the approach. This poor decision-making likely reflected the effects of fatigue produced by a long, demanding duty day, and, for the captain, the duties associated with check airman functions. Contributing to the accident were 1) the Federal Aviation Administration (FAA) pilot flight and duty time regulations that permitted the pilots’ long, demanding duty day and 2) the TVC operations supervisor’s use of ambiguous and unspecific radio phraseology in providing runway braking information.