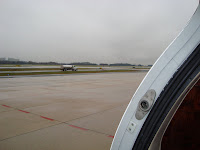 Here's a picture of a fuel truck approaching that intersection we talked about earlier. I wouldn't want this vehicle to unload its contents into my airplane. This is a AVGAS (AViation GAS) truck, and jet engines require Jet Fuel. Avgas is currently available in several grades with differing maximum lead concentrations. 100LL Grade, spoken as "100 low lead", contains tetra-ethyl lead (TEL), a lead based anti-knock compound, but less than the "highly-leaded" 100/130 avgas it effectively replaced. Most piston aircraft engines require 100LL and a suitable replacement fuel has not yet been developed for these engines. While there are similar engines that burn non-leaded fuels, aircraft are often purchased with engines that use 100LL because many airports only have 100LL.
http://en.wikipedia.org/wiki/Aviation_fuel
Because of the danger of confusing the fuel types, a number of precautions are taken to distinguish between AvGas and Jet Fuel beyond clearly marking all containers, vehicles, and piping. AvGas is treated with either a red, green, or blue dye, and is dispensed from nozzles with a diameter of 40 millimetres (49 millimetres in the USA). The aperture on fuel tanks of piston-engined aircraft cannot be greater than 60 millimetres in diameter. Jet Fuel is clear to straw in colour, and is dispensed from a special nozzle called a "J spout" that has a rectangular opening larger than 60 millimetres in diameter so as not to fit into AvGas ports. However, some jet and turbine aircraft, such as some models of the Astar helicopter, have a fuelling port too small for the J spout and thus require a smaller nozzle to be installed in order to be refuelled efficiently. 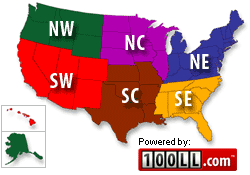