If I say wing walker, what do you think of? Well, you might think of a wing walker like Girl With Wings Jenny, who stands on top of a plane while it is flying and doing acrobatics. Jenny’s personal website. Jenny’s American Barnstormer team website.

The US Centennial of Flight Website has a great article on the origins of Wing Walkers.

Scholars generally credit Ormer Locklear as the first man to wing walk, or at the very least, the person most responsible for the growth of the phenomenon. Locklear was working as a carpenter and mechanic in Fort Worth, Texas, when he joined the U.S. Army Air Service in October 1917, just a few days short of his 26th birthday.

Stationed at Barron Field, Texas, Pilot Cadet Locklear started climbing out onto his Jenny biplane's lower wing while in mid-air to resolve certain problems. His first trip out onto his wing occurred when he could not see some communications clearly that were being flashed at him from the ground because the plane's engine housing and wing were blocking his view. Because he needed to interpret the communication to pass one of his pilot's tests, Locklear decided to leave the plane in the hands of his instructor/copilot and climb out onto the wing and read the message. He passed
the test, but his instructor was less than happy with him.

Or you might think of this kind of wing walker: The kind that walks along the wings 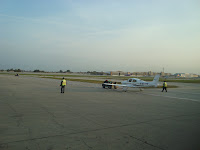 of an airplane as it is being towed or taxied around the ramp. Usually wing walkers are used for large commercial airliners squeaking into the gate. You might have noticed someone walking alongside your commercial flight holding a plastic orange wand. Raising the wand lets the rest of the crew know that the wing isn't going to hit anything. This is a pretty small airplane, so you might wonder why the tug operator needs two guys on either side of the airplane (I mean, can't he see the whole airplane??).

Well, kudos to the FBO we were visiting. They obviously were trained well and they are held to a high standard.

From Procedures and their Impact:

The key for hangarkeepers and FBOs is to follow industry practices and procedures for careful aircraft handling and employee training. It's a good way to win repeat customers and is also the right approach to zero in on costs, not just for damages but also for insurance. Underwriters pay careful attention to standardized aircraft movement procedures before issuing a policy. Running a clean operation pays off all around.

These and similar accidents are a constant concern for hangarkeepers and FBOs as well as aviation insurance carriers. The FlightSafety Foundation believes that the bill for all ground accidents involving aircraft, including the indirect costs associated with injuries and deaths, to be about $7 billion a year. Although figures aren't broken out separately for general aviation, the National Business Aviation Association (NBAA) estimates the cost of GA ground damage at about $100 million per year in direct costs.