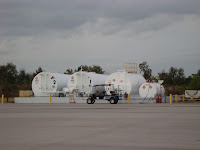 I took this picture on the ramp of one of the FBOs we stopped at last week. As pilots, we usually call these Fuel Farms. I decided to find out what the heck we were calling it that for...

I found out (via Wikipedia, of course) that they're supposed to be called oil depots.

An oil depot (sometimes called a tank farm, installation or oil terminal) is an industrial facility for the storage of oil and/or petrochemical products and from which these products are usually transported to end users or further storage facilities. An oil depot typically has tankage, either above ground or underground, and gantries for the discharge of products into road tankers or other vehicles (such as barges) or pipelines.

Most airports also have their own dedicated oil depots (usually called "fuel farms") where aviation fuel (Jet A or 100LL) is stored prior to being discharged into aircraft fuel tanks. Fuel is transported from the depot to the aircraft either by road tanker or via a hydrant system.

How dangerous is it to have large quantities of fuel this close to airport operations? How are these fuel tanks inspected? Is fire an issue?

Here is an exerpt from a NTSB report on a major fuel fire at the old Denver airport:

About 0915 mountain standard time, on Sunday, November 25, 1990, a fire erupted at a fuel storage and dispensing facility about 1.8 miles from the main terminal of Stapleton International Airport at Denver, Colorado. The facility, referred to as a fuel farm, was operated by United Airlines and Continental Airlines. From the time firefighting efforts were initiated immediately after the fire erupted until the fire was extinguished, a total of 634 firefighters, 47 fire units, and 4 contract personnel expended 56 million gallons of water and 28,000 gallons of foam concentrate. The fire burned for about 48 hours. Of the 5,185,000 gallons of fuel stored in tanks at the farm before the fire, about 3 million gallons were either consumed by the fire or lost as a result of leakage from the tanks. Total damage was estimated by United Airlines to have been between $15 and $20 million. No injuries or fatalities occurred as a result of the fire.

United Airlines' flight operations were disrupted because of the lack of fuel to prepare aircraft for flight. Airport facilities, other than the fuel farm, were not affected by the fire. The duration and intensity of the fire, however, raised concerns about the ability of airport and local firefighters to respond to a fuel fire of this magnitude. The origin of the fire also raised concerns about the safety oversight and inspection of fuel farm pumping operations.

According to FAA regulations:

22. Do fuel farms not located on airport property serving the airport need to be inspected for fire safety in accordance with Part 139.321? If so, how far away from the airport would this requirement apply?No. Part 139.321 fuel fire safety requirements are specific to fueling operations on the airport. Under Part 139.5, an airport is defined as 'an area of land or other hard surface, excluding water, that is used or intended to be used for the landing and takeoff of aircraft, including any buildings and facilities.' Buildings and facilities included in this definition are those adjacent landing and takeoff areas that support aircraft operations. While an off-airport fuel farm is a facility that supports aircraft operations, if it is off airport property, it is considered outside the scope of Part 139. However, any fueling trucks that use such off-airport fuel farms and come onto the airport must be inspected under Part 139.321.