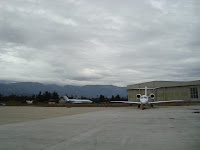 The Captain and I were discussing, on our way to California, how rare it is to see a thunderstorm in this part of the country. Well, weren't we proven wrong! There was a 6000ft ceiling when we flew in, with flash flood warnings issued for the area. Luckily, it only drizzled, and the view from yesterday looked much improved the next morning as the front moved through. In many parts of the country winter is characterized by increased rain, rather than snow, and meditteranean - like portions of the country near the Santa Ynez Mountains go from .03 in of rain in July to 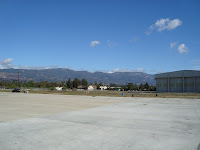 Conversly, the city we had flown from was in the northern, central US (and there it WAS sunny). They have more than 4 1/2 in of precip in the summer months, but in the winter, snow brings around an inch a month.
Read more about weather fronts on Wikipedia:

A weather front is a boundary separating two masses of air of different densities, and is the principal cause of meteorological phenomena. In surface weather analyses, fronts are depicted using various colored lines and symbols, depending on the type of front. The air masses separated by a front usually differ in temperature and humidity. Cold fronts may feature narrow bands of thunderstorms and severe weather, and may on occasion be preceded by squall lines or dry lines. Warm fronts are usually preceded by stratiform precipitation and fog. The weather usually clears quickly after a front's passage. Some fronts produce no precipitation and little cloudiness, although there is invariably a wind shift.[1]