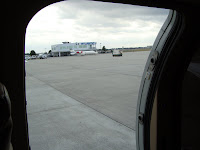 Previously I talked about bird strikes, which is a form of foreign object damage (FOD).

I was at an FBO in Louisiana this past week, and while we were waiting for our passengers, I saw this "street sweeper" cleaning up the ramp.

I have never seen this before. Although, again, just like cleaning the rubber off the runway, I assumed it was done. But why go to this trouble? Won't the airplanes just "blow" the FOD off the ramp? Why even bother?

Wikipedia: FOD costs the aerospace industry $4 billion USD per year[3] and causes expensive, significant damage every year to aircraft and parts and may cause death and injury to workers, pilots and passengers. It is estimated that FOD costs major airlines in the United States $26 per flight in aircraft repairs, plus such additional indirect costs as flight delays, plane changes and fuel inefficiencies.[4] 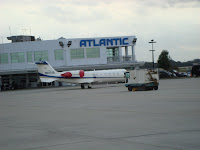 physical or economic terms that may or may not degrade the product's required safety and/or performance characteristics. Typically, FOD is an aviation term used to describe both the damage done to aircraft by foreign objects, and the foreign objects themselves (i.e. any object that has, or is likely to, cause damage.)[2]

"Internal FOD" is used to refer to damage or hazards caused by foreign objects inside the aircraft. For example, "Cockpit FOD" might be used to describe a situation where a clipboard, water bottle, or other item gets loose in the cockpit and jams or restricts the operation of the controls. "Tool FOD" is a serious hazard caused by tools left inside the aircraft after manufacturing or servicing. Tools or other items can get tangled in control cables, jam moving 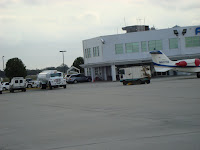 parts, short out electrical connections, or otherwise interfere with safe flight. Aircraft maintenance teams usually have strict tool control procedures including toolbox inventories to make sure all tools have been removed from an aircraft before it is released for flight. Tools used during manufacturing are tagged with a serial number so if they're found they can be traced.

Just FYI, Charles Brooks of Newark, New Jersey invented improvements to street sweeper trucks that he patented on March 17, 1896. His truck had revolving brushes attached to the front fender and the brushes were interchangeable with scrapers that could be used in winter for snow removal. http://inventors.about.com/library/inventors/blbrooks.htm