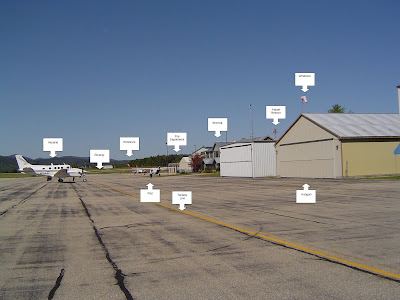 Here is an airport in Maine we flew to last tour, just as the leaves started changing. What a beautiful day to fly!

I've labeled all of the main (ha, no pun intended) parts of the airport ramp. This is a pretty typical setup at your smaller general aviation airports.

For example, the airport or aerodrome beacon. From Wikipedia, the free encyclopedia:

An aerodrome beacon is a beacon installed at an airport or aerodrome to indicate its location to aircraft pilots at night.

An aerodrome beacon is mounted on top of a towering structure, often a control tower, above other buildings of the airport. It produces flashes not unlike that of a lighthouse.
Airport and heliport beacons are designed in such a way to make them most effective from one to ten degrees above the horizon; however, they can be seen well above and below this peak spread. The beacon may be an omnidirectional flashing xenon strobe, or it may rotate at a constant speed which produces the visual effect of flashes at regular intervals. Flashes may be of just a single color, or of two alternating colors.

In the United States, the Federal Aviation Administration (FAA) has established the following rules for airport beacons:
Flashing rates
24 to 30 per minute for beacons marking airports, landmarks, and points on Federal airways
30 to 45 per minute for beacons marking heliports
Color combinations
White and Green — Lighted land airport
Green alone* — Lighted land airport
White and Yellow — Lighted water airport
Yellow alone* — Lighted water airport
Green, Yellow, and White — Lighted heliport
White, White, Green* — Military Airport
*Green alone or yellow alone is used only in connection with a white-and-green or white-and-yellow beacon display, respectively.
Military airport beacons flash alternately white and green, but are differentiated from civil beacons by two quick white flashes between the green flashes.
In Class B, Class C, Class D and Class E surface areas, operation of the airport beacon during the hours of daylight often indicates that the ground visibility is less than 3 miles and/or the ceiling is less than 1,000 feet. Regardless of the weather conditions, the FAA has no regulation that requires airports to turn the beacon on during the day.
At some locations with operating control towers, Air Traffic Control (ATC) personnel turn the beacon on or off with controls in the tower. At many airports the airport beacon is turned on by a photoelectric cell or time clocks and, ATC personnel cannot control them. [1]