We flew over the shuttle launch pad today NINE minutes too early! In case you weren't aware, the Discovery shuttle launched today with a woman commander. 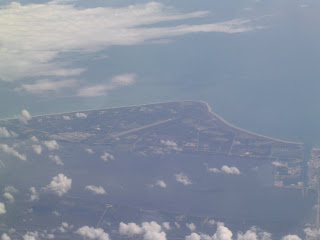 NASA Hails Smooth Launch
NASA officials and launch managers were pleased Tuesday following a clean countdown and flawless launch of space shuttle Discovery from NASA's Kennedy Space Center in Florida. Launch Director Mike Leinbach said the launch team at NASA's Kennedy Space Center was able to study a potential problem of ice buildup without jeopardizing the shuttle while still launching on time."It was one of the cleanest countdowns we've had since I've been launch director," Leinbach said. Discovery and its seven astronauts have a tight schedule that calls for placing the new Harmony segment to the International Space Station, moving a tower of solar arrays already in space to a new location and overseeing the station crew rotation that will see Discovery astronaut Dan Tani and station resident Clayton Anderson switch places."(There is) just a tremendous set of challenges in front of us," said Bill Gerstenmaier, NASA's associate administrator for Space Operations.There won't be much time to savor the liftoff, though, because preparations are already under way to get Atlantis over to the launch pad for a Dec. 6 launch. "This is exactly what the (launch) teams have trained multiple years for," Gerstenmaier said. http://www.nasa.gov/mission_pages/shuttle/main/index.html
STS-120 is the 23rd shuttle mission to the International Space Station, and will launch an Italian-built U.S. multi-port module for the station. Retired Air Force Col. Pamela A. Melroy will command the STS-120 mission to take the Node 2 connecting module to the station. Melroy, a veteran shuttle pilot, is the second woman to command a shuttle. Marine Corps Col. George D. Zamka will serve as pilot. The flight's mission specialists will be Scott E. Parazynski, Army Col. Douglas H. Wheelock, Stephanie D. Wilson and Paolo A. Nespoli, a European Space Agency astronaut from Italy. Zamka, Wheelock and Nespoli will be making their first spaceflight. Expedition 15/16 Flight Engineer Clayton Anderson will return to Earth from the space station aboard shuttle mission STS-120. That flight will carry his replacement, Daniel Tani, to the station. Tani will return on shuttle mission STS-122.