Last Saturday I went to space.

Ok, ok. I went to the Space Station Science Day at NASA Glenn Research Center in Cleveland, OH, that was put on for about 200 Girl Scouts. Close enough? Trust me, at the end of the day I FELT as if I had completed an intergalactic trip. These girls have serious energy! Girls With Wings was invited to teach the girls about becoming a pilot because one of the requirements of commanding the spacecraft is having experience piloting a jet.

Because of the set-up of the day, we did not do our usual presentation, shown here. Instead, we fell into the different stations that were set up around the room. This way, the 120 2nd and 3rd graders there from 9 am to 12 pm and the 80 4th and 5th graders from 1 pm to 4 pm could go around the room and visit the stations they found interesting. 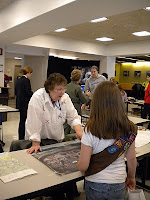 had the help of members from my Lake Erie 99s chapter, who are so supportive of Girls With Wings. (Thanks, ladies!) We set up our five stations to progressively teach the girls about being a pilot. It was amazing to see the looks on the Girl Scouts' faces as they were told that, yes, all of the women working at these tables were, in fact, pilots!

Alice had the first station. She explained to the girls why we were there and showed them some of the tools we use to get to where we are going. They got a kick out of looking at the VFR (visual) charts around Cleveland and tried to figure out where their house was on the map. Then we talked about the charts we used when we couldn't see the ground and how you would the charts to navigate from one point to the next using the instruments in the airplane until you got to your destination. [A station is tuned up into the navigation radios and directs an arrow for the pilots to follow.] 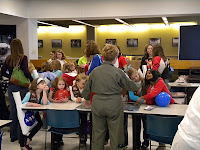 Nancy (wearing her Civil Air Patrol flight suit) then talked about the other instruments in the cockpit. We used a glass display for this one. I like to tell the girls that I have to ask them ONE question, and if they can get the one question right - I know they have the potential to become an pilot as well. I point out the display right in front of the pilot's yoke and ask them why that screen is colored blue on the top and brown on the bottom. They always get it (well, maybe with one more hint or so) and I congratulate them on their obvious intelligence. Then I ask them what it means if one of their wings is shown below the horizon and the other above? Usually at least one girl out of every crowd gets it, no problem. Some times I have to demonstrate with my wings, otherwise known as arms, to show them we'd be turning. We try to get the girls to talk as much as possible with us instead of just talking to them. This method allows them to figure concepts out, building their confidence, and keeps them engaged. You'd be surprised what a seven year old knows. Even if she doesn't know that she knows it. 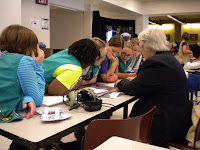 At the next station, Meigs discussed with the girls about Air Traffic Controllers and how to talk to them on the radio. I'm telling you, the girls always love to learn the phonetic alphabet!

At each table the 99s also asked the girls whatever questions they might have, so a lot of other subjects were covered. I had the next station, where I tried to recap to the girls what all they had learned. As I did, I pointed to each station and asked them what was discussed. The answers were interesting, to say the least. You just never know what is going to make an impression on someone!

After we summarized the lessons from the previous stations, the girls got to put what they learned into practice. We filled their engine with fuel (otherwise known as a balloon with air) and sent their airplane down the course to Florida. 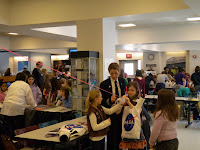 Sarah took a break from helping the girls try on uniforms to help these girls take flight. One girl would act as the pilot while another was her Air Traffic Controller. I was the mechanic, attaching the "engine" to the "airplane" with scotch tape. I made sure to point out that this was not standard operating procedure on a real airplane, where duct tape was more often used. Good thing girls have already developed a sense of humor by this age. 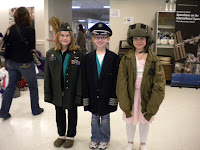 As I was walking down the hallway during the lunch break I heard some girls asking each other what their favorite station was. The answer I heard was, "the one where you got to try all the clothes on!" The parents took pictures with cell phones and cameras - which I hope end up on their facebook pages and in the girls' photo albums (or whatever suffices for albums these days).

Whatever we can do to leave a lasting impression was well worth it. It's very inspiring to know that these girls got excited over trying on my old uniforms.... Trust me, I don't give the appeal of the uniforms themselves that much credit. As my five year old niece watched me put on my airline uniform one day, she laughed uproariously at my "dressing like a dad!" 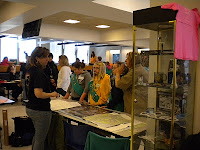 Later in the day, Lori, an employee of NASA herself and a pilot, took over Alice's table. I just met Lori at this event but already she assures me that she can hook me up with an astronaut to be on the Girls With Wings role model page. Sweet!

I didn't get a picture of the last volunteer, Darlene, but I will put up a picture that she took of this troop of girls sporting their GWW "Yes, Girls Can Fly!" tees available in the online GWW pilot shop. 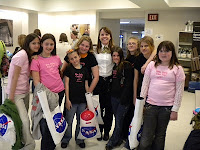 All in all, as a first time attempt at setting up such tables, I think it went really well. I really appreciate the help from my fellow 99s and the effort that Dennis from NASA put into getting this event off the ground. I would also like to recognize the parents who made the effort to bring their girls to the Space Station event on a beautiful warm sunny Saturday in Cleveland (a pretty rare occurrence).

One note, though. Apparently the 2nd and 3rd grade slots were filled quickly, but the 4th and 5th graders took longer to register (and never made it up to the goal of 100 attendees). I wonder why that is? It seemed to me the older girls had just as much interest in the stations as the younger girls, so was it the parents who had lost interest in bringing their girls to such events? What do you think?