Intro from Lynda: I've gotten quite a few questions about Air Racing and I usually have to respond "I don't know. Let me go check Wikipedia...." Of course, this completely disregards the wealth of information within the Girls With Wings community. For example, I met a Air Racing aficionado at last year's Air Race Classic and I thought she might be willing to do a guest post for the GWW blog. I was right. So here is her post. I know I'll learn a lot!

Eight years after my grandfather’s third place finish in the Indy 500 (he is pictured at left), twenty chick pilots with a sense of adventure challenged each other in what was dubbed the “First Women’s Air Derby,” and became affectionately known as the “Powder Puff Derby” when Will Rogers saw lady pilots powdering their collective noses prior to starting up the props. 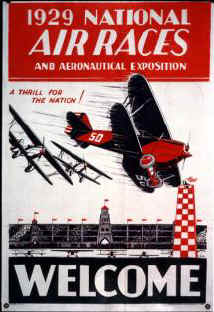 Taking off from Santa Monica, California, they raced their fabulous flying machines to the site of the National Air Races in Cleveland, Ohio. The year was 1929 and the races continued each year until WWII, when both Indy and the Women’s Air Derby were put on hold. Post-war, the name was changed to “All Women’s Transcontinental Air Race.” Today’s Air Race Classic picked up after AWTAR was discontinued in 1977, continuing that traditional transcontinental speed competition.

Air Race Classic, Inc., is a non-profit 501(c)(3) organization with a purpose to ignite that spirit of competition and camaraderie that is a boon to aviation. The race tends to spur dreamers on to pursue personal goals. The general public is drawn to the cities participating in the start, fuel stops, and finish, as well as home towns of pilots. Many people join the excitement through sponsorship, ground-air assistance, timing and officiating, and as spectators and supporters. Overall, each summer brings the spirit of the race to advance aviation through education, competition, careers, and fun.

Teams work with weather, aircraft performance at different altitudes, and air traffic conditions. They spend hours pouring over charts and weather forecasts to formulate race strategies. Even though there is competitiveness, there is a strong sense of camaraderie among racers. Pre- and post-race activities develop strong bonds of friendship and respect. Safety is always a priority.

In my first cross-country air race, 2008, 34 teams were given four days to complete a route approximately 2,400 miles starting in Bozeman, Montana and ending in Mansfield, Massachusetts. While it used to be that the fastest airplane won the race, now all airplanes are handicapped – meaning each plane is flying against its own target speed, so every entry has an equal chance of victory. Handicapping encourages competitors to play the elements; weather, winds, etc. Flying is restricted to Visual Flight Rules conditions in daylight hours only, but at least one of the two pilots on each team must have either an Instrument Rating or 500 hours as Pilot in Command. This race is open to female pilots, and airplanes from 145 to 600 horsepower.

Each of the eight race legs, between 280-320 miles, is timed and with handicapping that means that it’s possible for the last arrival to be the winner. Reaching each leg, the pilots must fly by a timer and then either land or continue on in the next leg.

Transcontinental air racing requires endurance and patience. Waiting out bad weather (we had plenty of that), choosing the best time of day and altitude to fly each leg of the race to find the optimal atmospheric conditions, i.e., best tailwinds or least head winds, trying to stay on course with not even a degree of change in the heading, presented challenges to staying focused while encouraging that part of me that is persistent and competitive.

My 2008 teammate, Caroline Baldwin, and I placed 18th in her airplane, a Piper Cherokee 180. Not what we hoped for, but we incurred no penalties, did not have to deviate for weather, had a positive score on each leg, and finished the race without being disqualified. I learned how to do a fly-by for a timer and how to build a race strategy. I met some incredible women, some who fly professionally, or are retired professional pilots, others who do this for fun; a song-writer, a few engineers, a retired federal judge, a farmer, a few teachers, and many more with interesting backgrounds. Every racer was treated to the most hospitable, friendly folks in every town where the race touched down.

Caroline and I received a “Leg Prize” which is awarded to racers with the three fastest times for each leg of the race. We earned the third-place prize on that last leg into Mansfield. Most importantly, we had a fun and safe race.

What could we have done differently to place higher? Well I thought of a few things. There are areas in the atmosphere where one may find the optimum tailwind, and knowing how to find that takes some practice. I think I was finally getting it toward the end of the race. Flying straight is important too. Drifting off course by just one degree means you will have to adjust later to get back on course and just one degree can cost valuable seconds. It takes a lot of concentration to fly a consistent heading, and when the wind isn’t a perfect tailwind, when it’s a quartering tailwind, coming from an angle behind us right or left, a certain amount of it is a crosswind, keeping a heading is difficult while we’re being blown in the direction of the wind. Another factor was that the cowling on Caroline’s airplane didn’t rest exactly aerodynamically symmetrical atop the engine, undoubtedly, that cost us airspeed by creating more drag on the airframe.

Just knowing this air race is something not many people have done, even those with extensive aviation backgrounds, the challenge that it offers, is enticing. My mom and my husband were two of our biggest fans. Mom had team t-shirts made for us and my husband, Mike, was there at the finish line in Mansfield, cheering us on to that final timing line and for all the celebration and activities over the next two days. I had become a veteran of air racing, another Air Race Classic in the history books, and I had the fresh perspective of a new racer, already looking forward to 2009. 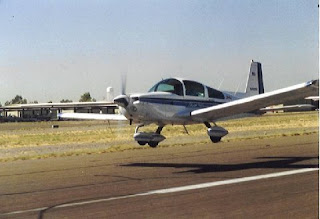 I raced again in 2009, with race partner Jodie Perry, of Austin, Texas. We finished 17th in Jodie’s Piper Archer. This year will be the first year I will race my own airplane, a Grumman Cheetah (pictured at right), and the first race for my race partner, Dr. Elizabeth Kummer, of Dallas. We are truly excited about the adventures that await, and are honored to be flying in support of CaringBridge.org, a wonderful non-profit organization that helps families and friends of ill people keep in touch during the most difficult times by providing a free personal website.

Photos and articles from around the country are posted on the Air Race Classic web site: www.airraceclassic.org, along with the 2010 route: Fort Meyers, Florida to Frederick, Maryland. Our team blog will be at www.TeamEly-Kummer.blogspot.com. We hope you’ll check in during the race and cheer on all the racers to an exciting and fun finish.

Wishing Linda and all of the racers a fabulous time this year. I raced last year but not this year, though I intend to be at the terminus to see them all arrive safely. Please let me know if you have a special area of interest - so you can do a guest post on the GWW blog too! - Lynda