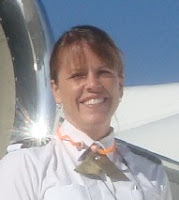 I've been alluding to some the many great things on the horizon for Girls With Wings, and one of those things is Acrocamp. Although admittedly I'm the only GWW going, this event is going to be made into a documentary featuring yours truly, the Executive Director of GWW. So any publicity arising from my upside down exploits benefits the organization, no?

A couple of months ago I heard about a project a guy I had met at Sun n Fun was working on: Acrocamp. [I just love this name. It deserves to be said with the same kind of flair as Bond. James Bond. IMHO.] As it was announced, "Four pilots from different walks of life and around the country gather in Michigan in May or thereabouts to take over a Part 61 flight school for four days and fly aerobatics for the first time."

I was hoping I was a shoe in for several different reasons, not the least of which is that Steve Tupper, the man behind Acrocamp, has a beautiful daughter Ella who I also met last year in Sun n Fun. According to Dad, I am her second favorite person in the whole world - obviously the Girls With Wings tattoo made a great impression on her.

Steve also loves my sense of humor (which is a rare but admirable quality in a person) and thinks my enthusiasm will play well on the camera (I hope he feels the same way about my regurgitative abilities). Additionally, although I am a 5000 hr pilot, I have very little experience in small airplanes and other than my spin training for my initial fixed wing license - no aerobatic training.

A couple of definitions for you non-flyers. According to the FAA: a spin in a small airplane or glider is a controlled (recoverable) or uncontrolled (possibly unrecoverable) maneuver in which the airplane or glider descends in a helical path (shaped like a helix) while flying at an AOA (Angle of Attack) greater than the critical AOA. Spins result from aggravated stalls in either a slip or a skid.

Because that is such a convoluted definition, I'll give you the Wikipedia definition of a stall, which is a bit easier to understand. Stalls in fixed-wing flight are often experienced as a sudden reduction in lift as the pilot increases angle of attack and exceeds the critical angle of attack (which may be due to slowing down below stall speed in level flight).

And as long as I'm there:

Aerobatics is the practice of flying maneuvers involving aircraft attitudes that are not used in normal flight. Aerobatics are performed in airplanes and gliders for training, recreation, entertainment and sport. Most aerobatic maneuvers involve rotation of the aircraft about its longitudinal (roll) axis or lateral (pitch) axis. Other maneuvers, such as a spin, displace the aircraft about its vertical (yaw) axis. Aerobatic flying requires a broader set of piloting skills and exposes the aircraft to greater structural stress than for normal flight. In some countries, the pilot must wear a parachute when performing aerobatics.

1. I'm 41 years old and haven't lived life on the edge for a while (some might say dedicating yourself to running a nonprofit when furloughed from your job is pretty risky, however). I have been known to skydive, rappel, etc., but not for some time. This is a great way to get my hair to stand on end again (literally). This is the kind of stuff that keeps us young!

2. I'm scared. Oh, heck, yes, I'm scared. When I did my spin training referenced above for the first time I scuh-reeeamed the whole way. And not just the first time. I'm pretty sure my instructor and I were on our fourth iteration before I could calm my vocal cords (hyperventilation ceased to be an issue on the second). Of course, we did them until I could enter and recover on my own, but still. And as I referenced in my post about Going Flyin' I'm going to be a flight instructor to some folks that just might try to kill me. I need the confidence of knowing I can recover from any, ahem, unusual maneuvers the students might attempt.

Which leads me to 3. Promoting Girls With Wings. I want to be able to show people who are considering getting into aviation that even though I'm scared (did I mention I am afraid of heights, too? Most pilots are.), I'm going to do this anyway. GWW is all about inspiring girls to reach their full potential and I want people to know that even if they're scared they should give it a go anyway. You might not succeed, but at least you you gave it a shot.

I am hoping not to fail during my aerobatics training, but just in case, they assure me I'll have a parachute.