Sharing the dream of flight

We bring you another guest post, this time by Monika Petrillo. Enjoy! I know I did.

Sharing the dream of flight with the next generation By Monika Petrillo info@flyaboutmovie.com

When I was 24, I decided to get a pilot's license. Inspired by that, my father followed suit a year later, getting his license at age 58.

Together, we went on to fly a single-engine plane around the continent of Australia, a journey I documented with my film "FLYABOUT" which has been showing at AirVenture in Oshkosh for the past two years.

For those of you who haven't seen the film, let me tell you that the relationship between my father and me became one of the main challenges on that journey. The unavoidable "switch of generations" plays an important role in the movie.

'm happy to add that my father and I have safely made it to "the other side". But it wasn't easy. Now, eleven years later, I have two children myself. With all the "Flyabout" screenings in the past months, they have become aware of the fact that their mommy is a pilot, and my six-year-old daughter is now constantly begging me to take her up in a plane. 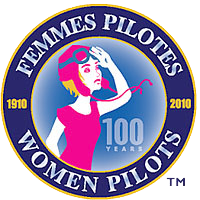 I wasn’t quite sure when I would be ready. And then I heard about this worldwide record-setting event in celebration of the 100 year anniversary of the first woman pilot. The goal was to introduce as many women as possible to aviation in one single day. As soon as I learned about this fantastic idea, I knew: This was the time to pass on my dream of flying to my own daughter.

I ended up introducing a total of three "women" to flying today. Two of them were six years old and VERY excited about the experience of flying in a small airplane over their own house, school and past the Hollywood sign. But they were probably most excited when I handed them their certificate and told them that they had just contributed to setting the "World Record of Most Women Introduced To Flying In A Single Day".

When I asked them what their favorite part was about the flight, my daughter’s friend said: "The landing!". My own daughter smiled and said: "The moment when the plane went up and then down. That felt a little bit like being in a roller coaster."

My own favorite part? - Finally being able to share my dream of flying with my daughter.

… And who knows, maybe in another few years, my daughter and I will circumnavigate Africa together and produce the sequel to “Flyabout”.

Thanks, Monika, for your guest post! I'd like to emphasize three things in her post. 1st, Flyabout is an amazing film and I cannot say enough good things about it. I thoroughly enjoyed it, as did my 6 year old niece. Yes, six years old. If anyone can get a six year old to watch a beautiful, educational and inspiring hour-plus long documentary, it's

Monika. It is available for sale on her website, as well as the Girls With Wings store. Which brings me to point number two. If you like her daughter's tee, that is also available in the GWW store.

Thirdly, the event Monika refers to is still going on! To celebrate the Centennial of Licensed Women Pilots and Women’s Day, women pilots from around the world will attempt to set a new worldwide flying record: the most women introduced to flying by women pilots in one single day, March 8, and in one single week, March 6 to March 12. Visit their website for more information.