Last time on the blog I covered the airplanes that will be used at Acrocamp. And although I admitted the reason I wrote the post might have been because I was also educating myself, the same does not hold true for this post. I am familiar with all of the maneuvers that Steve Tupper of the Airspeed podcast tells me I'll be doing. [Pause while the laughter subsides.] 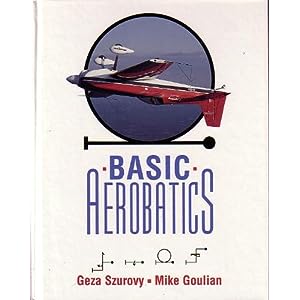 Part of our homework was to read Basic Acrobatics by Geza Szurov and Mike Goulian. My copy of the book arrived last week and I just sat down last night to read, study and learn it. So I'm going to cover some of what I've learned about the maneuvers I can expect to do at AcroCamp over subsequent posts. It is, actually, a really interesting book which takes some, but not all, of the mystique out of aerobatic flying. It's still awesome, but proves these aren't magic tricks, after all. More like science. Elementary, my dear Watson.

The podcast I refer to was done before the campers were announced, so it covers some of the considerations in choosing the campers, like that we should be less than 220lbs, which thankfully doesn't disqualify me. I also had to prove I have long enough legs to reach the pedals. This IS sometimes an issue for me, so fingers crossed that parachute behind me helps... The producer was also looking for campers that represent different minority groups, because, as he says, "the fact that you are a woman doesn't matter. Gravity in aerodynamics is color and gender blind." That definitely applies to me and my co-camper Michelle.

Ok, so now that I'm in, what can I expect to be doing? The first order of business once we get to the AcroCampGround, Steve says, is for us to get the feel of the airplane and then move on to "Energy management concepts" and maneuvers: wingovers, stalls, pitch oscillations, unusual attitude recoveries. As the sorties go on: loops, rolls, hammerheads, and spins. The other aerobatic maneuvers are simply variants or combinations of those. Toward the of middle of camp we'll be designing our own aerobatic routine in consultation with the instructors. They're even talking of possibly judging and awarding trophies for best executed, bravest, most improved, and my favorite, who scared the instructor most. Ha ha. Lots to accomplish in just four days!

To get all of this done, we're expected to do three sorties of 1.3 hrs on the first two days, then 2 1.7 on days three and four for a total of eight hours on the Hobbs. [

No, not this Hobbes, silly, the Hobbsmeter that records elapsed time for purposes of logging flighttime in an airplane.] That's a lot of flying when you consider the strain of flying upside down and sideways on the body. Motion sickness, everyone says, usually improves in subsequent flights but weather, the health of the aircraft and the people are all factors that will affect susceptibility to nausea. I've been ramping up my workouts (to increase ability to process oxygen and improve muscle strength) in preparation hoping it will help.

The reason for this is Steve says there's three types of pilots, those who have hurled, those who will and those who lie about it. My biggest fear is getting sick during maneuvers and not being able to continue the flight. We were advised if we get sick, there's no shame. We are just expected to head back to the airport and most likely practice tailwheel instruction. With all this to accomplish, I want to make sure I don't get sick right off the bat and have to quit. If the weather's too bad to accomplish aerobatics, at least we should be able to get a tailwheel endorsement. There's nothing we can do to guarantee good weather.

This has been a massive undertaking for Steve - and we haven't even started yet - AcroCamp is May 12th thru 16th (although it is coming up quickly, now that I think about it). Thankfully Steve has worked out the best prices for us to basically take over a flight school for four days to do the camp. I appreciate this since I'm furloughed and this is a rather pricey endeavor considering my current financial situation, but I have outlined some of the reasons that I feel like it was worth pursuing - and I'll keep discussing it over the course of the next few weeks. Steve is covering all of the costs of actually producing the documentary, which has got to be significant, so all of you readers will be expected to purchase a copy of it when it's made available (I'm making sure you're reading til the very end). While Steve works out all of the camera angles and such, I'll work on my closeup. Makeup!