Yesterday was another painfully beautiful day in Cleveland. I say "painful" because we Clevelanders are used to cold, gray, miserable weather [How miserable? We made #1 on Forbes Most Miserable City list. Go CLE!]. The sun forces us to come out from underneath our rocks, squinting at its brightness, delaying the evolutionary eventuality that we will soon breed offspring here with no eyes at all. 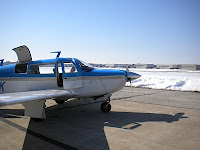 However, I have a friend with an airplane. [If you have not invested any time in doing the same, I suggest you block off time in your calendar to cultivate such a friendship.] She is studying for her CFI (Certified Flight Instructor) and is ready to take the test, but the poor weather, referenced above, keeps causing her to put it off. I also want to get my CFI, so I told her anytime she goes to fly to please call me so I can ride along. 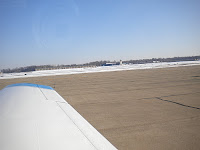 I've received to invitations to drag myself away from my rock (which curiously resembles a desk) to fly with her in her (dad's) Mooney. It's parked on the other side of Cleveland at Cuyahoga County airport, the headquarters of my previous employer, Flight Options. The first time I drove out there to meet her I hadn't realized there was even another side to the field! 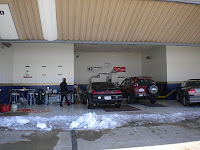 Again, my aviation background has been military to the airlines, so all of this GA (or General Aviation) flying is completely new to me. I had about 30 hours in a single engine airplane to transition from rotor to fixed wing aircraft with a few flights I had taken on my own in the interim. However, I do not consider myself a proficient GA pilot. But I'm working on changing that. To the left is the hangar where we've parked our cars after getting the airplane out. 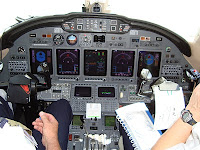 My airplane of choice recently has been the Citation X (I mean, I would choose to fly the X if I hadn't been furloughed), the cockpit of which is pictured at right.

Compare and contrast to the cockpit 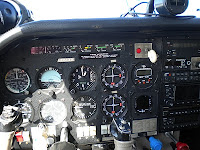 of the Mooney, at left. It's hard to say which one looks more complicated. However, I am used to the X, so it is going "back to basics" to see the steam gauges on the Mooney. My friend Jenn let me sit left seat, the PIC (Pilot in Command) seat, for the first leg of the trip. It took me a long while to get my "crosscheck" back.

From PilotOutlook.com: Cross-checking, sometimes referred to as scanning, is the continuous and logical observation of instruments for attitude and performance information. In attitude instrument flying, an attitude is maintained by reference to the instruments, which produces the desired result in performance. 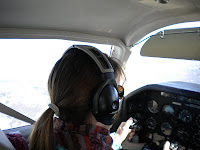 After I taxied the airplane out to the runway, Jenn handled all of the radios. I was concentrating on getting a feel for the airplane (note my death grip on the controls). Jenn allowed me to do the takeoff (while I'm sure sitting at the ready to take the controls if needed). This brings up an interesting point. I am a very experienced pilot, and though I may not be familiar with this airplane I am familiar with airplanes in general and know how they work (basically). I kept reminding myself that soon I will be allowing someone with no experience to fly (as a CFI). Just something to keep in mind. And to keep me up at night.

The takeoff was different than what I'm used to. Took us almost no runway, and the takeoff rotation speed of 71mph came really quickly. Leaving the ground was accompanied by a couple of burbles (the ones in the airplane were matched by the ones in my stomach - but I have a plan to fix that nervousness) and I had a heck of a time keeping my heading and desired airspeed. Jenn reassures me that the Mooney just wants to fly fast and it's my job to make it do what I want. This reminds me of occasions in my flight training where my training partner would complain the airplane wasn't doing as they wanted. Well, if it's not, make it. Who's in charge here? 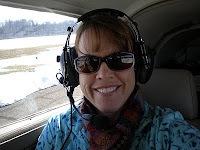 We didn't fly too far away, in fact to an airport that I used to do training flights to in the Huey when I was in the National Guard. I, of course, wanted to fly the landing like I did in the jet. Wrong. Jenn kept warning me that my speed was too high. The principals in landing were the same, though, so I kept the greasy side down (Jenn handled all of the flaps, gear and power controls for me). It was all quite a blur, to be honest with you. I was glad to move into the backseat for the ride home.

On the way back, Jenn had a friend newer to flying at the controls. It was interesting to watch her play CFI. Each of us learned 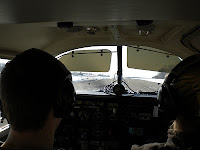 something from each other. I learned that a good reason to insist that people taxi at a reasonable speed (which I had always done additionally for passenger comfort) was the important safety factor of leaving yourself options if the brakes failed. There are often dropoffs at the end of the taxiways and if you're going too fast too make a turn you better be going fast enough to takeoff. I told her something that I had been taught. When you rotate the yoke to check the flight controls, your thumbs should be pointing in the direction of the "up" aileron. 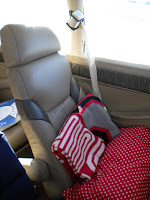 So it was a rather quick re-introduction to single engine flying which has illustrated that although it will take some time for me to get back into it, I'm not a lost cause. My "cone of understanding" or the extraneous items that get included into my crosscheck, increased by the minute. I especially noticed this on the second flight yesterday. I had the presence of mind to bring reinforcements in the shape of a pillow to get my feet closer to the pedals. Remind me never to complain about how small the X cockpit is (if I ever get back into it).

This second time I asked a lot of questions because, as you may know, we women like to understand everything! What is carb heat? What's the reason for exercising the prop in that manner? My takeoff was smoother, I was more forceful on the controls to get the pitch attitude I needed on climbout. I still went off course a little - probably because I'm so used to having the autopilot do it for me, but I also held my altitude spot on, instead of holding twenty feet off my 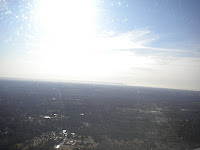 So a wonderful way to spend the rare sunny day in Cleveland. Still Jenn stated the mantra of all of us cave-dwelling Clevelanders: "I hate the sun." Only she was referring to how it got in her eyes during her maneuvers. Trust me, we'll take it over the clouds any day.