I have just returned from a wonderful weekend camping trip with my 5 year old niece Kate. I absolutely love camping, and being able to take my niece along makes it that much more enjoyable. You may remember the blog entry from last year where I took Kate to an airshow, but since I get to see her so rarely, I decided to cut her some slack and not force her to go to another one [Kate at age 10: "Oh, great, Aunt Lynda again. I guess I'll be spending hours staring at airplanes..."] 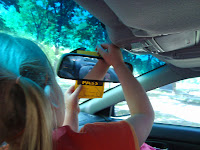 So we went up to the East Harbor State Park up on Lake Erie, where we started setting up camp. I thought Kate had developed the Ewww! tendency as she scouted out a place to set up the tent, but the bug aversion soon passed. While I worked on the tent (I learned last year that youthful enthusiasm and fiberglass tent poles don't mix), Kate rode her bike up and down the street scoping things out. Unfortunately, I had the tent up and the canopy tent halfway up (this is a 2 ADULT job), when my neighbors rode up. On their motorcycles. 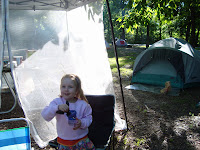 I am not against bikers per se, since I have a motorcycle myself. But it was a bad sign to have a group of them spewing profanity set up next door. Kate didn't seem to notice their use of a certain four letter word, but that could have been because of their ability to substitute it for any noun, adjective or verb seamlessly. By the time I realized it was going to be a problem, after they had cranked up the Willie Nelson and unloaded their cartons of beer (begs the question - how ever did they carry them?), I had set up and unpacked everything and didn't want to go through that again. I decided I would not let it bother me. After all, I had earplugs. I just didn't have any for Kate. 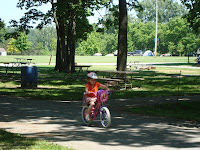 Camping with earplugs? Who goes camping with earplugs? Well, I usually don't, since half the fun of sleeping in a tent is waking up to the sounds of nature. But I have learned to pack a set of earplugs everywhere in all of my bags that I take on the road, so thankfully I had some in my purse. You just never know when you're staying at a hotel when the neighbors will decide to start celebrating the American Idol victory (this really happened to me in a hotel once and the security guard had to tell the people upstairs AND 2 doors down that they would have to cheer with a little more restraint). My rule of thumb (since this is the Life on the Road as a Pilot blog): No loud noises once you depart the elevator on your floor in a hotel. You never know who is trying to sleep! 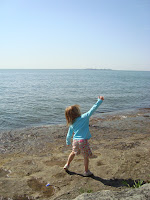 Kate and I spent Friday night at the playground, riding bikes and making s'mores. Our neighbors let us go to sleep at 11, but got us up at 6. Definitely not enough sleep for a 5 year old. She was pretty good playing at the campground's park, then on our trip to the Marblehead Lighthouse, occupying herself by throwing rocks in the lake after being disappointed to find out that the lighthouse and the museum were closed. She hates having her picture taken, which makes having a digital camera that much better. Most of the hundred or so pictures I have of her show her hiding behind her hair. Which is why I was so glad to get the one below of her on top of the jungle gym. After a stop at the ubiquitous Walmart for flip flops and a beach towel, we went to the beach. The lack of quality sleep soon started to take its toll. 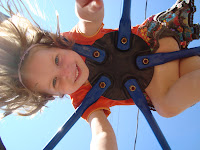 Poor Kate lasted about an hour before the short night started to get the best of her (that it was so cold didn't contribute to the fun). By the time we got showered and I put her down, it was three pm. And she was still sleeping at 4:30. I chose to wake her up so she wouldn't be up all night. [Little did I know I could have saved us the trouble. The neighbors kept the party going until 1am, when the park rangers finally made them shut it down.] We ended up just hanging out at the campsite, making s'mores again, and then going for a nature walk with a park ranger. 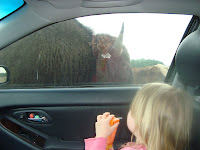 On sunday, we packed up the tent. Yes, we. Kate did help with the clean up - and I even let her help with the tent (collecting the pegs, though). At every other minute, however, she asked about the Animal Safari surprise that I had finally let her in on. I'm sure you've seen these, the parks where you drive through, letting "wild" animals feed off food you hold out your window? Well, I'm not sure deer, the majority breed, really constitutes wild, but they were definitely aggresive creatures. At one point, one tried to grab the cup of whatever that stuff is out of my hand and a whole huge pile landed on the ground next to the car. These are ruthless creatures, marauding beasts! Stay clear! I rolled the car forward slowly to move on and think I may have run over a deer's hoof anyway. The teenager at the front desk shrugged when I told her, 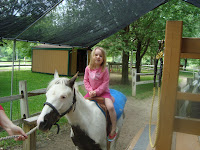 "well, it's their own fault." As you can see from the picture at right, there were also larger animals. The car behind me rode my bumper from this point on. I have to admit, I did have a sequel to Chevy Chase's "Vacation" spooling up in my head as the bisons lumbered near. That is a rare picture of Kate in the front seat. For the most part she hid in the back. I was frankly less than enthusiastic about the drooling, slobbery snouts shoving their way into my car window as well. At least Kate got a pony ride. She liked that MUCH better than the camel ride. Again, can't say I blame her on that one, either.

So, to get to the whole aviation related subject of this post: Not only did I feed Kate uncrustables and Frosted Mini Wheats, but the big meal of the camping trip was Mac and Cheese (the Scooby Doo variety). In addition, since the cooking implements were packed up, I'm not a great cook, we were on our way home, etc., I also took her to McDonalds to eat Chicken Nuggets. She excitedly dug for her Happy Meal toy first and came up with: something brown. Something buttermilk yellow with baby poo 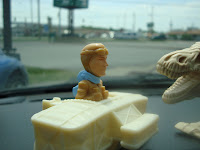 brown. And a splash of blue. She peered through the plastic trying to see what it was and I recognized that it was an airplane! Oh, what a coincidence! We do get to look at airplanes after all! And as Kate wrinkles her nose at my excitement, I catch the writing on the package. It's even Amelia Earhart from Night at the Museum. A WOMAN pilot! Only Kate now takes the plastic and stretches it across the face of said pilot. The disappointment was written there clearly. So I open the package and see, as you see here, how Amelia is rendered:

Now I'm not saying Amelia needed false eyelashes and red lipstick, but I mean, really? They couldn't have at least tried to make it look like a woman? Amelia was not the most feminine of 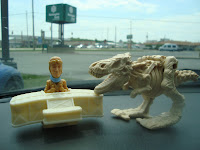 women, but she was a very famous woman pilot known the world over. This was an opportunity for McDonald's to trumpet the fact that "WOMEN DO FLY!" But how many parents took the time to read the package and tell their kids? (I didn't see the Night at the Museum movie, so perhaps it would be obvious to those who have....)

As the Amelia Earhart Birthplace Museum states, "Her hope for the future progress of aviation was not that she would be well-known or remembered, but "that women will share in these endeavors, even more than they have in the past, is [Amelia's] wish -- and prophecy." Her accomplishments in less than 40 years, from July 24, 1897 to July 2, 1937, earned Amelia the 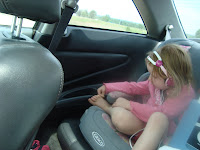 prestige of being the most famous female aviator in the world -- an accomplishment that stands today. "

Luckily(?), a woman seated near us had ordered a Happy Meal and got a dinosaur which she thought Kate might like. Given the two, Kate started playing with the McDinosaur instead. At least she played with both toys on the drive home. But then again, she also played with her toes.