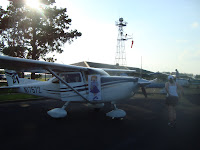 (Today, time 1300Z, near KASL at 3500ft) We made it to the airport early, about 6am, and it was already hot and humid in Lufkin TX before the sun had come up! It was hard to wake up again at 4:30, but we wanted to get an early start to get as far as we could along our route since we are expecting a storm system toward the end of our trip. The volunteers at LFK FBO were amazing, by the way. Greeted us with cold drinks and snacks, provided rides to and from the hotel and were just in general very welcoming and friendly (especially Marianne, June and Newt). 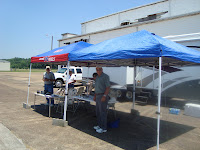 Today we are flying to Russellville AR to do our first flyby. (The picture of the timing team is obviously taken at an airport where we landed). We will likely continue on without stopping since we topped the tanks last night. As with some single engine Cessnas, the right tank burns faster than the left, and the fuel quantity gages are not totally accurate. Topping off gives us a good reading to base our current fuel consumption off of (now we just have to go another 2 1/2 hrs without a bathroom break [someone learned the hard way yesterday about drinking all their water within 10mins and flybying the first stop - Heather].

Speaking of fuel flow, my usual ride burns Jet fuel at 1000lbs per hour. This 182 burns at about 13 gallons per hour. Sounds pretty good, huh? Except this time I am having to pay for the fuel. Even at the discounted price $3.79/gal, it cost $291 to fill up our tanks. Gulp.

I am having a great time, and am so glad I had the opportunity to do this. I am also so pleased to have the support of all the folks on twitter and facebook. A pilot dad on twitter with a 10 year old daughter sent the following messages this morning:

dhindmanjr @GirlsWithWings I answered most of her questions yesterday through various web sites and your blog post. She is sleeping right now..

And: We will send any questions your way this evening when we check your progress. Best part so far is the Daddy, Daughter ...

Then: time sharing my passion for aviation through your flight. So thanks again. :)

So additionally, I am very appreciative that others are getting a lot out of our trip! 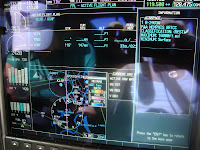 (Time 1420Z, near KLIT at 6500ft) We just executed our flyby at RUE and climbed out enroute to KGNF. Ahead of us is R-2403A, R is for restricted. The Garmin 1000 actually displays all of the information we need to be aware that our flight route is taking us through this block of airspace. The aeronautical chart (or map) tells us info as well, like that the inclusive altitudes are surface to 16,000 ft. We are receiving flight following from Little Rock approach and were able to request the status of this airspace, 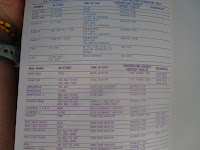 which turned out to be inactive. (See it portrayed on the paper map to the right.)

We've had some interesting questions from the controllers we've been talking to along the route. Everyone wants to know why thirty some single engine aircraft are flying in the same direction. Even the controllers aren't aware of the AirRace, but Longview approach seemed to have heard of the Powder Puff Derby and was very willing to look around for more favorable winds. He asked if it was because we were losing. I told him it wasn't because we were losing, but we wanted to be "more winning." The only ones he found were at about 18,000ft which is impractical and impossible for us since we don't have supplemental oxygen.

We crossed the Mississippi River at 1510z. And my Aussie co-pilot took a picture. 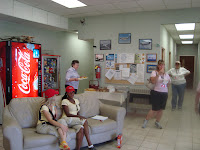 We landed at Grenada MS, where our aircraft was the first to land. It was a bit disorienting not to see the usual line of aircraft parked in front of the FBO. But the folks couldn't have been nicer. In fact, one of the fueler's mother, Fredonia, had personally cooked and baked an amazing spread. We hung around here for a while, before proceeding on to Sparta, TN. Some decided to drive on to Jacksonville, IL, but we're going to wait to depart until the morning, when the storms should be weaker. Therefore, it's an early to bed, since we have a 4:15 wakeup.

Couple of new items on the GWW AirRace Page: http://girlswithwings.com/AirRace.html

Thank you all for following our participation in the race and for offering your encouragement.